India's bank note switch: the view from a hill town

India's Prime Minister Narendra Modi has suddenly taken high denomination bills out of circulation, confusing millions in the country. The effort will move India toward a cashless economy, but it will take time for people to make the cultural shift.

Notes of 500 and 1,000 Indian Rupees banned; the news spread instantly. After all, it is not common that the country's prime minister addresses the nation with no prior notice. No one, not even senior government officials or ministers had so much as an inkling of such an announcement.

Even as Mr. Narendra Modi was speaking, messages went viral with citizens assuming that the country has been tossed into some sort of financial emergency. India has more than a billion cell phone users and the news reached every corner, rapidly.

Since the beginning of November, I have been in self-imposed exile in a village outside the hill station of Kodaikanal in Tamil Nadu in the South of India. My stay in a solitary cottage tucked away is part of Penguin Random House India's first writer's residency award. While I must admit it is beautiful and cathartic, the poor connectivity has kept me slightly edgy in what I imagined would be a rather meditative phase in my life. Despite that, the news of the ban on currency notes reached me in no time. I was meant to be writing without disruption but clearly this was too big a piece of news to ignore. I earn my livelihood as a journalist.

I immediately checked my wallet to find that I was left with four one-hundred rupee notes to fend with for the next week after which I would be leaving and going back to the city. I had visited the farmers market the previous day and picked up enough supplies for the week. In these parts that is what people do. So I was assured of food until, I imagined, things would ease out.

The following morning, my housekeeper reassured me with all the details she had received on her cell phone forwarded by her bank and probably her friends and relatives. She was aware that there is enough time (fifty days) to exchange the existing notes and for the time being she said she had smaller currency to see her through. She even offered to lend me short-change if required.

The ruling government used the term "surgical strike" to describe the surprise the prime minister delivered. In recent months the cold war term was made popular by India's claims of carrying out military strikes on terror ‘launch pads' along the Line of Control with Pakistan. Since then, tension has escalated on the border and relations between the two countries have been at an all time low.

The prime minister's justification of this financial measure to weed out illegal or shadow economies had a lot of takers. But reportedly, he lost more than 300,000 followers on Twitter a day later. Along with appreciation for what people think will cut down corruption, a large number of people are angry at the inconvenience they are facing. The anger is increasing and the mood is changing quickly.

Among the objectives of this ban are curbing counterfeit notes, forcing financial disclosure and transparency, and striking at the heart of subversive activities like the narcotic trade and terror funding. A lot of business activities and professional services in India trade in cash and thus, end up not disclosing the actual income.

Elections are also fought using illegal money. This ‘strike' is expected to hit them hard. But India also has an informal economy and cash is the means of transaction. It is estimated that almost 85% of the informal economy will be held up for the next few days. Further, not everybody will move to a cashless ecosystem as the government presumes, and the higher currency notes will be back in circulation. So while this measure will block some of the illegal economy, it will not in any way stop the parallel economy, or people taking bribes, or undisclosed investments in real estate and the stock exchange.

But in sleepy Kodaikanal, which is primarily a tourist destination given its cool weather and proximity to several cities; the national "emergency' has been most visible on the tourists. Most families have returned because they were left with virtually nothing in their pockets.

A significant percentage of the population in India now uses digital money but places like this have poor connectivity and not many hotels or restaurants or shops accept electronic transfers. In fact most do not. Some die hard tourists, however, decided to wait and watch. I joined them with the hope that after two days when the ATM machines reopened, things would be back to usual. Although, I was skeptical about how soon and how seamlessly the banks would be able to dispense the new currency and exchange the existing ones, particularly in remote areas.

On Friday, I did an early morning survey of the ATM counters and found none of them were working. One of them had a notice saying cash for the day has been dispensed already. News of serpentine queues and chaos poured in from the rest of the country. Many hospitals that were meant to accept the old currency allegedly refused to do so and possibly led to the death of one infant. Some fuel stations accepted, others denied. One can imagine how many people in transit have been affected. Reports of people caught in the crisis are pouring in.

In small town Kodai, though people queued up in large numbers, they seemed more relaxed. A lot of trade happens in these areas on credit and word of mouth. Almost everybody knows each other, except the tourists or solitude seekers like me, who are literally counting every paisa we spend. I suddenly spotted an ATM with a short queue and easily withdrew the limit of two thousand rupees set for this transition. Overjoyed and feeling rich, I treated myself to filtered coffee, the local favourite at the town's heritage Pastry Corner. I even did some shopping for the weekend. It was quite amazing how a few hundred rupees, otherwise devalued, can actually brighten up your day.

This is not the first time; in 1978, India had taken the 1,000 rupee note out of circulation, with zero results. A shadow market emerged and regularized the existing notes showing it as legitimate income. But there is a difference; then, those notes were 0.6 percent of the cash in circulation. Now it is 86 percent of the cash in circulation. Is the government adequately geared to make this transition? After the first two days of banking, clearly the system has failed to meet the demands. Meanwhile, Kodaikanal goes on with its usual pace of coffee and vadas. Kishalay Bhattacharjee is an independent journalist and author. His most recent publication is Blood on My Hands: Confessions of Staged Encounters (Harper Collins India 2015). 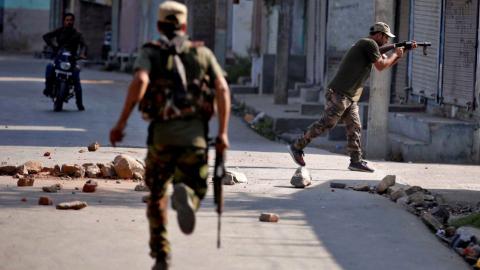