Jamal Khashoggi’s disappearance isn’t just another hit by a rogue state – it’s the symptom of a world where the actions of rogue states are rapidly becoming the new normal.

If Saudi Arabia is indeed to blame for the murder of the Saudi journalist and critic of the ruling Al Saud dynasty, its message is mercilessly simple: no Saudi citizen critical of the regime anywhere will be tolerated

There have been a few other instances of Saudi murdering dissidents and perceived subversives outside its borders, but the circumstances surrounding Khashoggi’s death are far from normal.

Khashoggi had gone to the Saudi consulate in Istanbul to obtain a document necessary for his impending marriage to his Turkish fiancee – he has not been seen since.

According to the Turkish police, Khashoggi was tortured and murdered by a 15-man ‘death squad’ sent from Riyadh. Though Saudi officially denies any involvement in his death, its mouthpieces took to twitter to boastfully taunt other Saudi dissidents.

Prince Khalid bin Abdullah tweeted at one, ‘’Don’t you want to pass by the embassy? They want to talk with you face to face’.

To use consulates as murder traps for journalists in other countries is unprecedented, but this kind of action has not emerged from a clear blue sky.

Over the past two decades, the world order has become severely degraded. While many thought the ‘war on terror’ was a mere culmination of US supremacy around the world, the reality was more complex.

The US under George W. Bush, with all its imperialist hubris, began a process that hugely weakened not simply vague concepts such as ‘international law’ and ‘human rights’, but it provided the nails in the coffin for the institutions that are supposed to uphold these things, most notably the UN.

Its mass criminality in Iraq put the smell of blood in the air – it was only a matter of time before other predators picked up the scent.

But if the 'war on terror' provided a huge lunge backwards in terms of the degradation of world order, the so-called ‘Arab spring’ was a moment of redemption and progress.

The revolutions came just as the Bush administration slunk off with blood on their hands, shocking those who were previously thought omnipotent and untouchable, and providing the greatest test of our generation.

Only the worst considered these revolutions, these huge movements of objective progress against vast systems of tyranny, to be parochial events whose success and failure were not of world-historic importance.

The worst, as ever, seem to have triumphed and so did counter-revolution in almost every national front of the Arab spring. This counter-revolution, in Syria, took the form of the 21st Century’s first genocide and the implications of the world’s indifference and appeasement of these genocidal forces. Despite numerous opportunities to support those resisting them and ending or mitigating the catastrophes, it fast-tracked what was an already decaying world order.

Every authoritarian on earth saw in Syria the reality that there was no force in the world willing to do what was necessary to stand up for the principles of democracy, liberty and human rights. Without going into extreme detail, one can see a grimly vicious pattern moving from the large to the local in all this: if nobody who can is willing to stop the mass cleansing, torture and extermination of Syrians, why would they care about the Rohingya people? Why would the self-determination and lives of Ukrainians matter? Why would Russia blatantly carrying out a fatal chemical weapons attack on the streets of an English town matter?

And why would the lives and liberties of journalists matter? Why, indeed, does truth matter at all when you can kill, torture and imprison those who try to tell it and pay millions to PR companies to simply invent it?

Jamal's place in this world

Which brings us back to the seemingly lonesome death of Jamal Khashoggi in the Saudi consulate in Turkey. Khashoggi is a victim of a state terror but he’s also victim of a wider war against truth.

The degradation of world order in favour of an abode of monstrous authoritarians has brought with it a necessary war on information and a cultivated will to pollute, degrade and control information.

This can be glimpsed in ‘soft’ form, which can be seen in the Russian sabotaging of the democracies of its enemies, as well as in ‘hard’ form, such as the murder, torture and imprisonment of critical journalists, as well as the use of PR firms to flood the media with ‘positive’ stories and ‘bots’ that swarm every negative story with obscurantism and trolling.

In more stark terms, we see this deliberate obscurantism used to justify genocide.

But the war against truth is something that has spread like wild fire in recent years, well beyond the killing fields of the counter-revolutions in the Arab world, which has seen an untold amount of journalists imprisoned and targeted for murder.

Putin’s Russia has become a vanguard of persecuting and assassinating critical journalists both within and without Russian borders. We see the consistent persecution of journalists and critics in Sisi’s Egypt, Modi’s India, as well as in PSUV-ruled Venezuela and, of course, in China, which has just recently abducted the head of Interpol in deeply dubious circumstances.

Increasingly, there is no safe haven for anyone who challenges power.

And it’s spreading right to the heart of the so-called ‘free world’.

Counter-revolution might be most immediately destructive locally, but when an entire country is destroyed, its ramifications expand across the world.

This is the context within which Saudi would feel confident enough to use its consulate in an economically turbulent Turkey to murder Khashoggi.

The so-called ‘free world’ is not immune from this either – as authoritarian forces arise within and around it, we see similarly disturbing trends against dissent and criticism.

We’ve seen the fascist regime of Viktor Orban in Hungary crackdown on NGOs tied to George Soros – NGOs that aid the refugees that Orban wants to eradicate from Europe – while the far-right in Italy seek to follow suit, with fatal consequences for migrants.

Most recently, and horrifically, the investigative journalist Viktoria Marinova was recently found raped and murdered in Bulgaria after she had undertaken an investigation into the imprisonment of two of her colleagues for their work uncovering a vast fraud involving EU funds and Bulgarian oligarchs.

All of this savagery occurs under the same haze of the global rise of authoritarianism and degradation of world order.

Jamal Khashoggi was murdered because he constantly chipped away at the veneer of the image of Crown Prince Mohamed bin Salman, who projects the image of himself as a ‘reformer’, but is in reality Saudi’s very own totalitarian strongman fit for the ages.

He has disappeared because he strived to tell the truth – the most dangerous weapons against those who deal solely in skulduggery.

If he is indeed dead, than Jamal was a martyr for the truth. Around the world, he will be one of many similar martyrs – and I fear there will be many more. 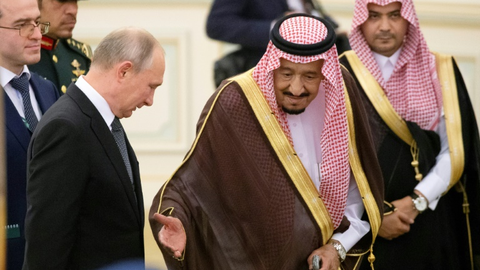