The Notre Dame fire serves as a poignant reminder of the sacred structures lost in Iraq and Syria in recent years.

The fire that swept through the centuries old-Notre Dame cathedral in Paris is a poignant example of the bonds between sacred architecture and local inhabitants, national identity, and global patrimony.

The Notre Dame fire serves as an occasion to remember the disasters that befell similar religious structures in Iraq and Syria in recent years: Samarra’s al-Askari shrine in 2006, Mosul’s shrine housing Prophet Jonas and the Al Nuri Mosque, destroyed in 2014 and 2017 respectively, and Aleppo’s Umayyad mosque, whose signature minaret was demolished in 2013, to the numerous Yezidi shrines that were obliterated after 2014.

Disasters, whether accidental or deliberate, resulting in the destruction or damage of these monuments serve as a reminder that these are not static structures of stone and mortar, but spaces that are alive. They are embedded in the urban and rural religious fabric of these communities, sentimental to the local, yet part of a global heritage as well.

The conflagration that swept through Notre Dame invoked comparisons to both deliberate and accidental infernos that struck secular structures, ranging from the World Trade Center to Grenfell Tower in London, to the National Museum of Brazil.

The Notre Dame fire, however, served as a reminder of the frailty of revered architecture as well. For example, the Paris disaster helped galvanise donations for three historically Black churches in Louisiana that were destroyed by an arsonist.

In this vein, the destruction and efforts to rebuild destroyed sacred architecture in Iraq and Syria serves as a poignant reminder and perhaps inspiration of resilience. They show that Parisians are not alone in their loss and that the people of Mosul and Aleppo share a common pain and show a collective will to rebuild.

The Scarred architecture of Iraq and Syria

The shrine in Samarra housing the bodies of Imam Ali al Hadi and Hassan al Askari dates back to 944. In 2006, a bomb brought down most of the structure, followed by a second attack in 2007 that brought down its minarets.

The attack sparked a sectarian civil war in Iraq that raged from 2006 to 2008. UNESCO aided in the reconstruction effort, and the construction crew included both Shias and Sunnis from Samarra. The shrine was reinvented as a symbol of sectarian reconciliation in the divided city, today bringing in thousands of Shia pilgrims and reinvigorating the economy of the predominantly Arab Sunni city.

The city of Mosul endured vast devastation during its occupation under Daesh, losing two sacred sites that were emblematic of the city. The tomb of the Prophet Jonah in Mosul was destroyed by Daesh in 2014. Jonah is revered by Muslims, Christians, and Jews and its destruction was an attack on all three Abrahamic faiths.

The Great Mosque of Mosul, known as the Al Nuri mosque, featured a leaning minaret, colloquially referred to as Al Hadba, which served as a symbol of the city. The mosque and its iconic minaret were destroyed by Daesh as it retreated from the city in the summer of 2017. The Umayyad mosque of Aleppo also had an iconic leaning minaret. It too was destroyed in 2013 during Syria’s civil war, along with most of the mosque itself.

The destruction of Palmyra at the hands of Daesh is another moment that stands out in the eight-year war in Syria. Members of Daesh destroyed the Temple of Bel, built in 32 AD - one of the most significant monuments in Palmyra. The Arch of Triumph and The Temple of Balshaamin were not spared either while several statues were vandalised and part of the Roman theatre was destroyed.

Finally, the Mosul province featured small temples capped with conical domes, holy structures used by the Yezidis. They too were destroyed by Daesh. The smaller Yezidi temples rarely gathered much media attention, and unlike the grander structures of Mosul and Aleppo, which are being rebuilt, for Yezidis reconstruction is not just about rebuilding destroyed religious architecture.

One takes for granted that Christianity and Islam will survive even if their iconic religious structures are destroyed. Most of Iraq’s Yezidis fled into exile. The Yezidi faith is integrally linked to the physical space that the Islamic State destroyed, connected to a network of sacred places within the areas of their sacred homeland in northern Iraq. As contact with Yezidi holy places had been physically severed and its population dispersed, its religious traditions have been brought closer to extinction.

For the faithful, religious sites provides a space for veneration and pilgrimage. In secular terms,  these structures form the social fabric of urban centres, whether it be Mosul or Paris, and serve as national symbols as well.

These structures from the past provide fixed locations for national narratives constructed in the present. However, these heritage sites, when destroyed symbolise the future as well. How a city, a nation, or the world comes together for the recovery of these structures serves as a reflection of societies coming together to address a shared trauma.

Whether it is international teams within UNESCO rebuilding the sites in Iraq or Palmyra, Syria, or the raising of donations around the world for Notre Dame, which leads to awareness of Black churches destroyed in Louisiana, destruction often leads to cooperation in the name of preserving the cultural fabric that these structures represent. This destruction can bring together diverse communities in a common cause of rescuing global patrimony.

What the Notre Dame fire symbolised is that all sacred structures are part of global human heritage and should be mourned and rebuilt regardless of one’s faith or religiosity. 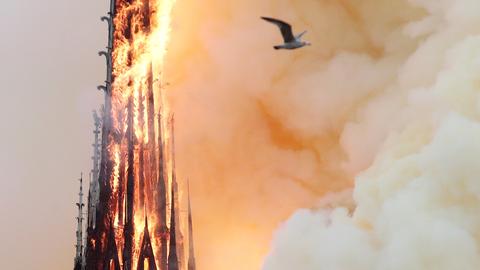 World heritage sites that were lost to disasters