Our black future under Trump? Look to Europe

While many Western European governments anticipate the incoming U.S. administration with dread, their attitudes and ignorance about their black citizens are not terribly far from that of President Donald Trump.

With the Trump administration upon us, African Americans have much to worry about, most specifically how President Trump, who embraces explicitly racist and white nationalist agendas, will treat them. As a professor who researches, publishes and lectures on Black Europeans I would argue we should look to Europe to prepare ourselves.

While many Western European governments anticipate the incoming U.S. administration with dread, their attitudes and ignorance about their Black citizens are not terribly far from that of the new President. In my lectures and publications on the topic, I often encounter students, audience members, readers, and colleagues who are surprised and resistant to the reality of a racially intolerant Europe. After all, they argue, didn't France embrace African American expatriates for years? And aren't Europeans enthusiastic supporters of U.S. Black culture like jazz –in fact, more so than the Americans?

I am happy to admit that both notions are true—but rather than being the rule, they are the exceptions to a long and ugly history of anti-Black racism, a history that, despite the overwhelming evidence, is frequently denied by European politicians, academics, and even everyday citizens who understand themselves as anti-racist. Yet both racist stereotypes and racist behaviour against Blacks has long been an ugly norm and one that is increasing.

Anti-black racism is hardly a new phenomenon on the European continent.

As I show in Becoming Black: Creating Identity in the African Diaspora, Europe is in fact the birthplace for anti-Black racism, legitimated, codified and propagated in the 18thcentury by some of its greatest thinkers, such as David Hume, Emmanuel Kant, and Hegel. In addition to denying or ignoring this history, many contemporary European governments, continue to downplay or ignore the truth of their role in slavery and colonisation. Sweden still denies its role in the slave trade, it was only in 2011 that French textbooks included its role and the brutal truth of its African colonization, and the German government is loathe to acknowledge its less-famous but first true genocide: that of the Herrero of Namibia (also known as the Ovaherero).

This parallel to the U.S. is instructive because Trump's recent appointees, such as Attorney General Jeff Sessions has been censored for explicitly racist comments, and his "chief strategizer" Steve Bannon, is an old hand at whitewashing the history of slavery in the U.S.

It is the contemporary lives of Blacks in Europe that should worry us the most. In Germany, it is not uncommon for victims of hate crimes to find themselves harassed by the police and discouraged from filing a report. Yet Germany does not only resist understanding Black Germans as equal citizens; it can also struggle with seeing Black people as human: in 2005, the city of Augsburg decided the best place to stage its "African village exhibit" was in its zoo.

Much of the racist violence in Europe is familiar: from police attacks and murders of Black Europeans, to discrimination in housing and unemployment, to verbal harassment (such as shouts to "go home to Africa"). Yet the few gains Blacks in the United States have made in the past 200 years are almost wholly absent in Europe.

As a whole, European has had pitifully few significant ministries headed by a Black person—a deeply uneven tally when one starts to count the number of African Americans who have held central positions such as Robert Weaver, Patricia Harris, Condoleeza Rice, Alphonso Jackson, Loretta Lynch, Jocelyn Elders, Hazel O'Leary, Rod Paige, Eric Holder, Jeh Johnson, Colin Powell…and the list does go on. Of course, there has been no Barack Obama, nor a single Black ambassador, such as Frederick Douglass, who was ambassador to Haiti from 1889-1891.

Of course, one can point out that there are far more Blacks in the United States than in Europe (about 35-40 million), but given that the population of Europe is larger than the United States (397.5M to 319M), and that Blacks have been part of continental Europe since antiquity—well, one must wonder why it can only count a grand total of roughly three Black ministers who had portfolios that reached far beyond specific issues such as children, educational success, overseas departments, gender equality or integration (to be clear, these concerns are deeply important, but politically they hold little power).

So, as of 2017, we have had: France's former Minister of Justice Christiane Taubira (who resigned in protest of President Sarkozy's draconian immigration laws), Italy's former Minister for Integration, Cecile Kyenge (whom another politician compared to an orangutan and also endured racist onlookers throwing bananas), and Europe's very first, The Netherlands' Abraham George Ellis, who served as Minister of the Navy from 1902-1905.

Racism cannot only be combated through laws, it must also be confronted and its myths exploded through education. Indeed, the fear of the power of education to combat bigotry seems borne out by the creation of "Professor Watchlist". Unlike the U.S., European universities have very few faculty of colour, much less institutional support for the research and study of racial diversity in Europe.

In fact, few Europeans believe that diversity, much less multiculturalism, is a desirable state of affairs. Despite these concepts enjoying at least vigorous debate in the U.S., they may be labelled anti-American by the time Trump is done with us.

If we are to avoid going the way of Europe, we must support those professors, students, and disciplines who seek no more than to tell the truth. If we are successful, we may not only succeed in minimising the effects of the Trump administration; we may even enable change in Europe for the better. Michelle M. Wright is Professor of African American Studies and Comparative Literary Studies at Northwestern University, and is a Public Voices Fellow. 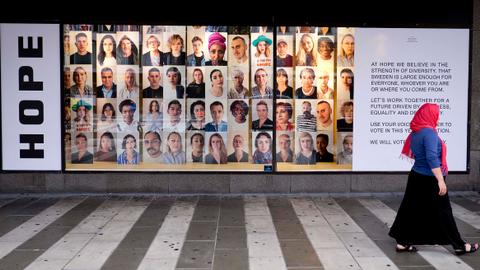