The film suffers from some stereotyping but captures Middle Eastern women in a far more accurate light than most mainstream cinema and television.

Papicha is Algerian slang for 'babe' and the title of Mounia Meddour’s directorial debut. Co-produced alongside French producer Xavier Gens, the feature premiered at the 2019 Cannes Film Festival.

Its whirlwind tour of quotidian life in the context of Algeria’s Civil War [1991-2002] revolving around student Nedjma (Lyna Khoudry) and her female coterie, whose dreams are ripped apart by political violence and the ensuing tilt towards religious dogma.

Algeria’s civil war, fought between the then-government and 'Islamists', and Meddour’s first hand lived experience of it, forms the film's backdrop.

Papicha’s thematic richness — part coming-of-age, part drama, part-thriller — does well to animate the social context of 90s Algeria, but the plotline at times feels like it is sliding into cliches of 'Islamists versus liberals', men against women. The required dramatic effect presents clear-enough reasoning for this.

At its core, Papicha is the story of an aspiring seamstress's dogged pursuit to stage on the catwalk, a protest against political Islam. In a flick-of-a-switch moment, Nedjma's life changes irrevocably. She finds herself dedicating every waking moment to sewing a collection of dresses that her classmates will model in a school fashion show. The political undertones of this act are conveyed, as is the rage that conceals Nedjma’s trauma.

Fashion, for Nedjma, as it may have been for Meddour who described herself as a 90s-era Papchica growing up in Algeria, is all-encompassing. It is the language of defiance, expression, individuality, tradition and reinvention — rolled into one. The film’s colour palette and vibrant outfits lend itself to the 90s aesthetic, which also adds symbolic value, representative of the normalcy that the incoming tide of violence swept away.

Meddour comments in a previous interview that while filming, the crew recognised a heartfelt need for people to talk about those years. “Everyone had a need to share their experience and what they went through,” she says, but perhaps Meddour is no different.

Nationalism is consciously present and most visibly represented by the silk Haik, Algeria’s eponymous traditional garment, whose sumptuous silk is what Nedjma’s collection is made from. Its omnipresence stresses the continuity of culture and its transformation as an act of reclamation.

In one scene, Nedjma, her mother and sister model the garment in their garden, as their mother recalls impish tales of the Haik’s political use in the Algerian War of Liberation when women smuggled Kalashnikovs right under French noses.

The university dormitory, where Nedjma and her friends live, is where much of Papicha is set, as well as the surrounding concrete neighbourhood where the girls sneak out, late at night. As time passes, the girls watch the walls of familiar walkways transform into concrete billboards washed over with posters, featuring faceless women in black cloaks and the words “dress modestly”.

A cackle of female morality police, donning the stereotypical cloak (abaya), frequently storm the girl’s dormitory, chastising them for a perceived lack of religious observance. They swoop in like crows, rummage through the girl's belongings and disappear as abruptly as they appear.

The choice to cast women with aquiline noses and dark skin as members of the morality police is disconcerting, but it raises the all-important question over the intended audiences. Who are they?

The heavy presence of spoken French, broken up by smatterings of Algerian-Arabic, is a giveaway sign. It feels like an attempt to engage with the Middle Eastern diaspora. While the film entered Cannes as an Algerian entry, Algeria withdrew consent, nullifying plans for an Algerian-premier screening, without explanation.

Meddour’s positionality and the film’s autobiographical centricity adds context to the way Nedjma is and how she navigates conflict-ridden Algeria.

The added symbolic value of Nedjma’s inner circle, Wassila, Samira, and Kahina, is that they embody the change that she lusts after. When she falls, members of her inner circle lift her up.

Kahina, the group's outcast, is prodded and poked at for dreaming of emigrating to Canada. Unlike Kahina, Nedjma is adamant that she will grow old in her motherland. An unexpected (shock-laden) plot twist focused on Samira, challenges conventional wisdom about lust and love, matchmaking and marriage in conservative societies.

Papicha’s fast-paced tempo aptly captured the heightened fight or flight felt by Nedjma. Its speedy shuffling between scenes introduces us to a hidden scenescape, away from urban violence, but limits screen-time for character-development.

The film’s finale prepares one last storm. Nedjma applies make-up as though it's war paint. Not long after the girls stream onto the self-made runway, draped in Nedjma’s masterpieces, militants storm the school, gunning everyone in sight.

The chaotic closure digresses from Papicha’s key themes, centring instead on the poisonous political climate of Algeria’s civil war. Miraculously, and predictably, the leading heroines survive.

Overall, Nedjma’s right for independence is one that Middle Eastern females, and perhaps men, can relate to. As an Arab woman, Nedjma, for me, turns on its head the popular Arabic idiomatic expression; “eat as you please, but dress to please others.”

Her loving and unquestioning mother smooths any potential speed bumps a woman like Nedjma may encounter, but the question of how society may perceive her quest is left unanswered.

I was also reminded of my seamstress aunt, who surrendered a seat at a prestigious fashion academy 45 years ago to silence male objection in her immediate family.

Setting aside stereotypical cliches and frail subplots, Papicha captures the panache, verve and charisma of Middle Eastern women in a way mainstream cinema and television has not.

The feature represents a small but mighty stepping stone, powerful enough to spur on a new generation of Middle Eastern filmmakers. 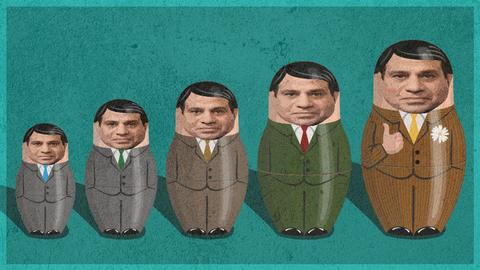