More than 70 years after the birth of the Somali Youth League a new generation of young people is ready to drive change in the country.

Today, 76 years after the formation of the Somali Youth League (SYL) on May 15 1943, is a day to remember our fallen heroes who lost their lives in the course of freedom from colonial rule. Their sacrifice will never be forgotten as they have not died in vain.  But also, it is an opportune time to revisit the leadership role played by the youth in the independence of our country, Somalia, and the forgotten promise of youth empowerment.

The liberation of some African countries, including Somalia, from colonial rule in the 1960s, was a triumph of the young. When the Italian colonists lowered the flag in Mogadishu, they handed over the government to the Somali Youth League. Looking back after more than 55 or so years, it can be difficult to recapture that drive, the excitement and confidence of the years in which the struggle for independence culminated in the liberation of the greater part of the continent of Africa.

Most of the African leaders then were young and each one of them had begun their struggles in high schools, colleges and during their preparations. The 1960s was our finest moment and the crystallisation of all our hopes. In the words of Ghanaian politician and revolutionary Kwame Nkrumah, we had won the political kingdom.

He said: “We held the promise that our continent could liberate itself from the shackles of colonial rule and achieve the social and economic development for which its people had desired for long.”

But national independence manifested something else too, something that is easily overlooked with the passage of more than half a century. The social and political movements that resisted against colonial rule were overwhelmingly parties of the young.

Freedom was the promise of the young, the promise that there would be, always, something new out of the newly independent countries. It was a new dawn, not a return to the past. This promise of youth enfranchisement was in fact one of the most fundamental pledges of liberation, but over the years it became the most neglected. Far worse was the disregard of women’s participation in political leadership. The equality and emancipation of women was there in rhetoric, but it is fair to say that Somalia, like other African countries, fell far short in its practice. Liberation was for both sexes, but only men enjoyed its first fruits. That is a historical wrong that shall be corrected by this young generation.

Many of the hopes of independence have been disappointed over the succeeding decades. African cultures played a big role in this. Our societies are respectful of age, and our leaders have exploited the symbols of fatherhood, wisdom and experience to the full. In Somali culture there is an old saying that “a person year older than you is wiser than you”. Leaders were often keen to cite that old saying and the tradition of obedience to one’s elders.

The question we should ask ourselves at this juncture is how can young people’s past energy and their leadership role be revived to fulfil the promise of youth enfranchisement?

First we must recognise that Somalia, like many other African countries, has faced a number of external and internal problems since independence that has pushed the country over the cliff. It has become prisoner of its own history, constantly bringing back the past. This has led to a great distrust among the different stakeholders of the country, which resulted in a fragmented society segregated into regions. However, it should be noted that our youth in all corners of the country face the same common enemies. Disease, insecurity, radicalisation, piracy, instability and poverty are common enemies that don’t discriminate on the basis of region, clan or gender.

The last 30 years have been especially hard, as Somalia has suffered under civil war, warlordism and radicalisation. Educational opportunities have deteriorated immensely and the possibilities for young people to obtain an independent livelihood have decreased greatly. This is something I have experienced in person while working with various youth organisations on different policies regarding microfinance, human rights and youth development projects.

Young people in Somalia, however, have proven their ability to surmount impossible obstacles.  This gave them an impressive resilience and self-confidence, including a readiness to assess the situation at hand and to start anew where and when is needed. In addition, the development of communications technology, especially the rapid expansion of mobile platforms, has provided a unique opportunity for youth empowerment and the creation of social networks that can effect policy reform in their respective areas. We are at a crossroads and must decide which way to follow.

There are many reasons, too many in fact, for young people to be fearful about the future.  But there is equally an unbelievable optimism and a realistic determination to grapple with the problems and challenges of the present.  That optimism and energy is the most noticeable characteristic of our youth, and remains the resource that Somalia must exploit if it is to claim its position in the family of nations. Young people have amply shown their resourcefulness both in the diaspora and inside the country. Most of the young people I have encountered through my previous responsibilities are envisaging a new future that runs on the principles of productivity, innovation and entrepreneurship.

On all accounts, our elders have neglected their primary responsibility of allowing and grooming our youth to participate in political leadership.  Therefore, it is essential that our young entrepreneurs, intellectuals and their organisations join forces, pulling down barriers and effecting policy reforms where we can, above politics and above differences. To recapture the lost energy, it is time the collective efforts of our youth trigger a new policy vision, anchored in the twin notions of youth empowerment and responsible citizenry. The ultimate goal being to instill productivity and patriotism in our young citizens. 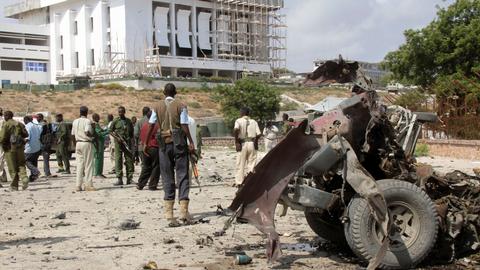