1
Türkiye's operation in Iraq benefits both countries
2
A United Ireland in sight after Sinn Féin's win in Northern Ireland
3
Why Türkiye opposes Sweden and Finland's NATO bid
4
Ukraine and Syria: Understanding the differences in US military aid
5
Dinmukhamed Kunayev: The forgotten father of Kazakh modernisation

The Houthis’ push to usurp the city in northern Yemen from the Hadi government risks jeopardising any chance of diplomatically resolving the country’s civil war.

Roughly 75 miles east of Houthi-controlled Sanaa is Marib. Since early last year, Houthi fighters have been fighting to take control of Marib, which would constitute a major game changer in the Yemen conflict.

Marib is a gas and oil-rich city located near the Saudi border. For some time Marib has been the UN-recognised government’s last stronghold in northern Yemen. From the standpoint of infrastructure development, economic growth, and state services, Marib had been doing quite well for itself, especially compared to so many other parts of war-ravaged Yemen.

In 2018, Adam Baron of the European Council on Foreign Relations described Marib as a “beacon of relative stability” that was “thriving” despite Yemen’s overall situation. The city was a “haven in the middle of a war…that provided hope” as Elisabeth Kendall, a top Yemen expert at Oxford University, put it.

If the Houthis successfully take Marib, President Abdrabbuh Mansur Hadi’s government would not be in control of any major areas in northern Yemen. To be sure, conquering this city would greatly enhance Houthi leverage at talks once they restart, while doing much to underscore the extent to which Yemen’s internationally recognised government is weak.

This Houthi push for Marib “might be driving the Biden administration away rather than thinking that they’re always going to be on tap for them,” according to the Atlantic Council’s Nabeel Khoury, who previously served as a US diplomat in Sanaa.

“The Biden administration is on tap currently. The Houthis can communicate, directly or indirectly, with the US government right now. But they will miss the opportunity if they think they can go full speed ahead in Marib.”

Not only could this continued Houthi effort to win the fight for Marib have negative implications in terms of how the Biden administration might react, but it could strengthen anti-Houthi resolve on the ground in Yemen.

As Khoury explained, the Houthis risk energising and uniting their adversaries from the pro-Hadi coalition and various tribes. Despite these actors lacking unity in the past, a continuation of the Houthis’ fight to usurp Marib could unify them behind an anti-Houthi military effort. Khoury warns, “the conflict from Marib can continue all over Yemen for a long time if it doesn’t end right away.”

The possibility of the Houthis taking control of Marib is cause for concern from a humanitarian standpoint. In the words of Mark Lowcock, the UN undersecretary-general for humanitarian affairs, hundreds of thousands of Yemenis fleeing Marib would lead to “unimaginable humanitarian consequences”.

It is undeniable that the Houthis have been brutal in their governance and there is every reason to assume that Ansurallah would commit more crimes in Marib when dealing with locals deemed to be allied with the Houthis’ enemies.

Because this city has been a safe haven for many Yemenis who fled the capital and other Houthi-controlled areas earlier on in the civil war, Marib falling to the Houthis would leave many internally displaced Yemenis in a position of far greater vulnerability.

For all parties interested in peacefully resolving the Yemeni crisis, preventing further bloodshed in Marib is critical. Now with President Joe Biden’s administration seeking to find a diplomatic solution to this conflict, US leadership must recognise the legitimate grievances and concerns on the part of both the Hadi government and the Houthis — plus other actors in the country such as the Southern Transitional Council (STC).

Because a military defeat of the Houthi rebellion has not occurred and is unlikely to succeed (especially considering the Biden administration’s decision to cut off US support to the Saudi-led coalition’s “offensive” military actions in Yemen), it is important to contend with the Houthis as an actor which has its own power centre in the war-ravaged country.

In order to preserve any hope for conflict resolution in Yemen and preservation of the nation-state’s territorial integrity, the different parties, including the Houthis, must come to the roundtable in good faith to negotiate a settlement.

Although difficult to imagine this taking place easily, quickly or smoothly, reaching a lasting ceasefire for both the Houthis and pro-Hadi forces to accept would be the first starting point toward achieving this goal.

The Houthis, who are justifiably worried about being massacred by their Saudi and Yemeni enemies if they were to disarm before others do, want to consolidate their hold on the land under their grip and expand to take over Marib.

But the Iranian-backed rebels’ push to capture this hydrocarbon-rich city could easily undermine the existing opportunities to make progress in terms of settling the civil war. A major concern is that ongoing Houthi actions vis-a-vis Marib will inform a narrative that the Houthis can only be dealt with militarily.

It would be tragic if the Biden administration buys this argument and gradually abandons its commitment to playing a diplomatic role in resolving Yemen’s conflict, which would be the opposite of what Yemen needs and deserves.

Will US foreign policy push Houthis closer to Iran? 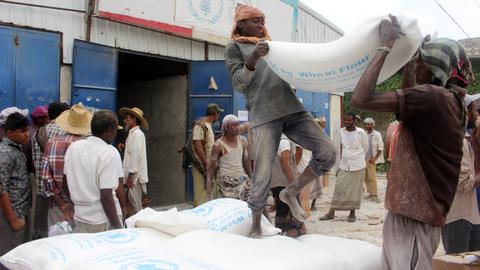 1
Türkiye's operation in Iraq benefits both countries
2
A United Ireland in sight after Sinn Féin's win in Northern Ireland
3
Why Türkiye opposes Sweden and Finland's NATO bid
4
Ukraine and Syria: Understanding the differences in US military aid
5
Dinmukhamed Kunayev: The forgotten father of Kazakh modernisation