The US-led invasion created the destruction that paved the way for Iraq’s looting. Without political stability, the future of Iraq — and the artefacts — remain endangered.

When Iraqi Prime Minister Mustafa al Kadhimi returned home from his visit to Washington last week with more than 17,000 antiquities over 4,000 years old, the unprecedented return of looted artefacts seemed a good first step. But it underscores an issue that has plagued Iraq for decades: you can’t separate the suffering of a nation from damage to its patrimony; they are inexorably linked.

While the pilfering of antiquities in Iraq is not a new phenomenon, the illegal smuggling of artefacts began in earnest under UN sanctions. The salaries of civil servants plummeted to a few dollars a month as the dinar devalued by over 1,000 percent and desperate Iraqis sold whatever they could to survive.

I remember visiting the ancient city of Babylon in 1997 and being offered a few choice artefacts by a guide. We toured the grandiose 1987 reconstruction spearheaded by Saddam Hussein, who saw himself as a neo-Nebuchadnezzar and had bricks inscribed with his name. It was completed at the height of the Iran-Iraq War that bankrupted the country as the US funded both sides and a million young men perished on the battlefield.

The guide, who had a PhD in archaeology, complained that his children were going hungry. He told me that, like so many Iraqis who suffered under the draconian 12-year UN embargo, he had to sell his furniture for basics like food and medicine.

The 2003 invasion only exacerbated the situation, opening the way for looters and violent extremists like Daesh, who often sold the antiquities they didn’t destroy on the black market to fund their so-called caliphate.

Iraq’s past and future

Ultimately, Iraq’s fate is tied to its ancient sites and antiquities on many levels.

Iraq’s past can be a vehicle for peace and reconciliation – a reminder that before Sunni and Shia, before Muslim and Christian, there was Uruk. Iraqi heritage is also part of its future, as pre-invasion tourism could be revived if security is restored and could provide an income for thousands of Iraqis.

Efforts by UNESCO to restore world heritage sites like the Erbil Citadel and sacred sites in Mosul’s battered old city and the recent opening of the Basra Museum bode well. But they must be backed up by political change, or such sites will remain empty of the foreign and internal tourism Iraq’s besieged economy so desperately needs.

Until stability is restored and the culture of corruption exacerbated by post-invasion kleptocracies is stemmed, this grand American gesture will be an empty one. While the return of 17,000 antiquities by the US may look like an act of largesse, it is only a drop in the bucket compared to the damage to Iraqi patrimony caused by the 2003 Anglo-American invasion.

“It is impossible to quantify the number of pieces that have been stolen from archaeological sites,” Qahtan al Obaid, director of antiquities and heritage at the Basra Museum, recently told the AFP.

In 2003, American tanks rolled over sensitive archaeological areas in Babylon and US and British troops returned home with many ancient objects as spoils of war.

The Iraqi Museum was looted, while US troops did nothing in spite of desperate pleas from curators to secure the building. Secretary of Defense Donald Rumsfeld infamously said, “Stuff happens.”

While some 7,000 looted items have been returned, there are at least another 8,000 missing. Ironically, most of the repatriated artefacts were stolen from the museum in the wake of the invasion. Many of them, like a rare fragment of a 3,500-year-old clay tablet depicting a dream sequence from the Epic of Gilgamesh (to be returned to Iraq in a few weeks), and other 3,000- to 4,000-year-old cuneiform tablets and seals, were seized by the US Justice Department from Hobby Lobby.

The American chain of arts and crafts stores acquired the artefacts from prominent auction houses, who in turn had acquired them from dealers in Israel and the United Arab Emirates who had traded them illegally. Most of the artefacts were donated to  the Museum of the Bible in Washington DC, established by David Green, Hobby Lobby’s billionaire evangelical Christian owner. The museum partners with the Israel Antiquities Authority, and Green donates half of Hobby Lobby’s pre-tax earnings to various evangelical groups, making him the largest individual donor in the US.

In fact, it was American evangelicals who pushed for the invasion of Iraq, led by George W Bush who claimed to be on a “mission from God” to “end the tyranny in Iraq” – that would be the tyranny of Saddam Hussein, a long-time US agent Iraqis liked to call “son of the USA”, whose initial rise to power was facilitated by a CIA backed coup.

Many evangelicals hoped the invasion might bring on Armageddon – just as the same demographic recently cheered Trump’s decision to move the American embassy from Tel Aviv to Jerusalem.

While the end of the world is still nigh, the invasion certainly made life hell for ordinary Iraqis, and backed by good Christian Tony Blair, made life much more dangerous for Iraqi Christians, who can trace their lineage there back to Babylonian times.

Iraq’s antiquities suffered alongside her peoples and still do.

Although colonial archaeological narratives try to separate one from the other, the fact is, when you smash a state, there are consequences.

It’s no coincidence that the illegal trafficking of Libyan antiquities rose exponentially after the NATO-backed overthrow of Muammar Gaddafi. And in a neat neo-imperialist hat trick, illegally trafficked pieces from Libya are currently on display at the Louvre. Meanwhile, their Syrian and Iraqi cousins fill the living rooms of wealthy collectors in New York, London and Geneva.

To paraphrase Colin Powell, who lied about Iraq having weapons of mass destruction in a march to war but also warned Bush of the dangers of an invasion, citing the “Pottery Barn” rule of foreign policy, “if you break it, you own it.”

While this phrase now takes on a rather disturbing literalism, the fact is that Iraq is still a very broken country and its patrimony – and our very world heritage - remain endangered.

It’s not so much a case of the “clash of civilizations” but rather a struggle between civilization and barbarism; a consumerist emporium of chachkas called “Hobby Lobby” that funds right-wing “Christianity” vs. the Epic of Gilgamesh.

The ancient Babylonian epic poem, in many ways is the first humanist text and the very opposite of the religious extremism – from American evangelicalism to the Islamo-fascism it fomented- that has wrought havoc in the region.

As the Disneyfication of Iraq- and indeed the whole Middle East- as a realm of pantomime villains and agency-less victims to be “saved” by the West continues unabated, and as the narratives of its ancient heritage are traded by international mercenaries, from Daesh to Hobby Lobby, it’s a small world after all.

Note: This article has been updated to reflect that the clay tablet depicting a scene from the Epic of Gilgamesh is to be returned in a few weeks' time; that Hobby Lobby acquired the objects from auction houses; and that many artefacts were donated to the Museum of the Bible, and not necessarily on display. 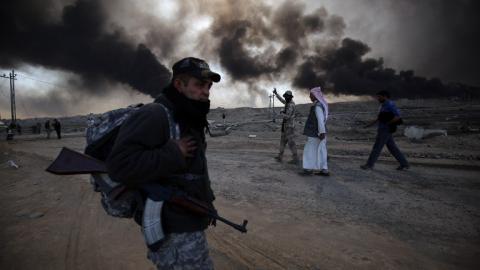