Three years on, how did the Daesh "caliphate" rise?

A long list of disastrous policies pursued by the US, its allies, and the government in Iraq created the conditions for Daesh to take advantage of the collapse of al Qaeda and the political marginalisation of Sunni Arabs.

Three years ago, Ibrahim Awad al-Samarrai, a little known Iraqi cleric better known by his nom de guerre of Abu Bakr al-Baghdadi, ascended the pulpit of the Grand Nuri Mosque in western Mosul, that now lies in ruins. From there, and in black robes and a turban perhaps meant to symbolise the Abbasid caliphs of old, Baghdadi declared the establishment of his own caliphate, demanding the obedience and fealty of Muslims around the world.

So began Daesh's (ISIS) global reign of terror. Prior to Baghdadi's declaration, Daesh had focused its efforts on territorial conquests in the Middle East. Since the US-led coalition intervened in Iraq and Syria and began rolling back the terrorist organisation's gains, ISIS has lashed out on a global scale, claiming attacks against civilian targets and cities across Europe, the United States and most recently in the Philippines through Daesh-linked terrorists.

Although Baghdadi's caliphate is crumbling around him, the key question to ask is what caused the group's meteoric rise in the first place? How is it that the Iraqi political system imposed by the US and its allies in 2003 failed so utterly, allowing a terrorist organisation to conquer a third of the country?

Although the original sin was definitely the US-led invasion that toppled dictator Saddam Hussein, it would be far too simplistic to blame this on Washington's actions alone. When the Baathist regime was shattered, the US and its allies simply had no real plans – and likely no intention – to fill the void with a secure, stable and democratic system.

The environment of chaos and sectarianism that emerged was as a direct result of the politicians that the US co-opted into its invasion plan, including Iran-backed Shia Islamist parties such as the now-ruling Dawa Party. By facilitating such groups, the US enabled Iran's entry into the game, and even now in 2017, no country wields as much influence in Iraq as the Iranians.

The results of this were predictably catastrophic. In late 2012, a cross-sectarian but Sunni-dominated civil protest movement rose up against the sectarian rule of then-Prime Minister Nouri al-Maliki, a pro-Tehran Dawa Party politician who is now vice president of the republic. Maliki, who has an almost pathological hatred of Iraq's Sunni Arabs, was accused of abusing Article 4 of the 2005 Anti-Terrorism Law and the de-Baathification orders instituted under American tutelage in 2003 in order to disproportionately target Sunnis, marginalise and inflict devastation upon them.

Rather than engage with the reforms that the peaceful protesters demanded – reforms supported by even hardline Shia figures like Moqtada al-Sadr – Maliki instead sought to crush the protests. Numerous atrocities were committed by security forces loyal to Maliki, including at Hawija in northern Iraq, where an Iraqi parliamentary committee concluded that 44 civilians, including children as young as 13-years-old, were killed – some of them execution-style with their hands bound.

After a year of peaceful protests with little attention from the international community who largely stayed silent as Maliki butchered his own people, Baghdad felt emboldened to act on 30 December 2013. Maliki ordered the violent dispersal of the main protest camp in Ramadi, the capital of Iraq's western Sunni Anbar governorate, triggering a wave of violence that provided the fertile ground for Daesh to infiltrate Iraq.

It is worth pointing out that Daesh was initially created as an al-Qaeda franchise that rebranded itself as the "Islamic State in Iraq". Al-Qaeda's defeat in Iraq did not come about due to the government that the US installed in Baghdad's Green Zone, but as a result of Washington's cooperation with Sunni Arabs who desired to root out and destroy the terrorists who were targeting Iraqis of all sects and faiths. Al-Qaeda was forced to largely withdraw to Syria to take part in the uprising against Baathist dictator Bashar al-Assad where it was able to recuperate, reequip and revive itself as Daesh.

Had Maliki not forced the Sunnis into a corner and made them fight for their survival in 2013-14, it is doubtful that Daesh would have been able to find their way back across the Iraqi-Syrian border amongst the Sunnis who had only recently defeated them. Instead of using its considerable leverage to pressure its ally into stopping his sectarian slaughter, the US failed to take heed of what may happen if the disenfranchised and oppressed Sunnis were forced to fight back.

In essence, while branding Saddam Hussein as the "Butcher of Baghdad" and toppling him, Washington allowed someone who is hardly better and likely much worse than Saddam to kill his own citizens.

The various armed Sunni groups that emerged – including the General Military Council for Iraqi Revolutionaries (GMCIR), an umbrella group representing many Sunni Arab tribes – to fight against Maliki felt that they either had to fight ISIS again, or else set aside their differences temporarily to focus on the better armed and more numerous Iraqi security forces. Due to the circumstances, they were compelled to choose the latter, and this fatal decision eventually allowed Daesh to swallow and subdue the revolutionary movement, and replace it with their own warped vision for Iraq's future. The other Sunni groups were either disarmed by Daesh, or else they went underground, awaiting the inevitable demise of Daesh.

Now that ISIS is being squeezed in its final holdouts in west Mosul three years after Baghdadi declared his caliphate, policymakers would be wise to learn from Iraq's very recent history. If Sunni Arabs continue to be persecuted after Daesh's defeat, then we will be doomed to reliving the mistakes of the past, and the rivers of blood already shed in Iraq will continue to flow to the detriment of the entire world. 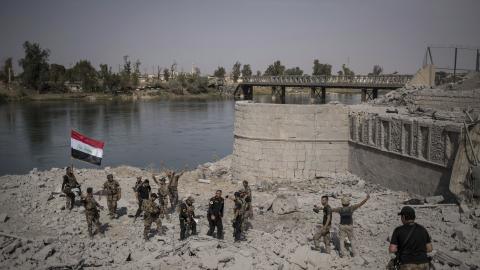 Is Daesh on the verge of obliteration?