The president’s political inexperience amidst an economic crisis does not bode well for his initial popularity following his power grab nearly a year ago.

On March 31, President Kais Saied struck the final nail in the coffin of what was once deemed the only democracy in North Africa by dissolving Tunisia’s Parliament. He accused the parliament of conspiring against him after it decided to hold an online session to discuss Saied’s continued rule by decree, which he has been using to govern the country since July 2021.

Saied's actions are the latest in an eight-month authoritarian drift that began in July 2021 when he suspended Tunisia’s parliament and dismissed then-Prime Minister Hichem Mechichi over alleged corruption scandals within the parliament ranks.

Mechichi, Saied’s advisor and close ally, had been appointed by the president himself in the summer of 2020. But once Mechichi showed signs of disagreement with the president, Saied removed him and froze parliament, announcing he would run the country through presidential decrees, refusing to consult the parliament further.

As in many North African countries, corruption is an issue in Tunisia, and it would be naive to assume otherwise. A vestige of the longtime dictatorship of Zine el Abidine Ben Ali — under whom over $1 billion per year was lost to corruption, bribery and criminal activity — corruption has become an endemic issue in Tunisia, impacting citizens and politicians alike.

Ruling elites and political leaders can also weaponise corruption to consolidate power. In the Middle East and North Africa region, this strategy is known all too well. Iran, and to some extent Libya and Iraq are all good examples of how ruling elites have leveraged politicised anti-corruption platforms to fight political opponents within government and political ranks.

Chatham House argues that political tensions between the Lebanese central bank and Hezbollah were a case in point. Starting in April 2020, Hezbollah ran an anti-corruption political campaign that sought to oust the current governor of Lebanon’s central bank, Riad Salameh, in an attempt to appoint its supporters to key posts for greater influence over the financial institution.

Legitimate anti-corruption campaigns must first be legal under a country’s constitutional framework. Saied’s campaign has been far from it. While his July 2021 actions were of dubious legitimacy, his recent decision to dissolve parliament was indubitably taken outside the existing legal framework. According to Article 77 of Tunisia’s Constitution, the president cannot dissolve parliament under the State of Exception, which Saied imposed in July 2021, and has ruled under ever since.

Moreover, Saied’s slow-paced and prosaic handling of corruption charges over the 2019 elections showcases his overall objective of getting rid of his political opponents rather than reforming the country.

Indeed, Tunisia is going through a severe economic crisis which may turn into bankruptcy if its economic apparatus is not reformed. The credit rating agency giant, Moody’s, recently downgraded Tunisia’s credit rating from B to C, making the country less appealing to foreign direct investment.

Additionally, unemployment is surging at 18 percent, inflation is on the rise and the country’s public debt has reached 100 percent of its gross domestic product. The International Monetary Fund (IMF) is currently negotiating a multi-billion-dollar rescue package to help fix the country’s finances, but at a very high cost. The IMF will likely demand crippling cuts to public spending, a daunting request for a country that employs 650,000 people – over 5 percent of the country’s population.

“The main concern of the people is the economy”, says Cherif El Kadhi, a policy analyst based in Tunis. “People want to keep their jobs, they want to make sure they have food on their tables.” According to El Kadhi, Saied is losing popularity, but many still support him.

“Tunisians did not like the political infighting happening among parties during Covid while people were dying. They are happy with Saied’s actions because they believe parliamentarians deserve to be treated this way after how they treated the country during the past two years,” El Kadhi continued, referring to the numerous corruption scandals plaguing Tunisia’s ruling political class.

However, not everyone is as nonchalant about Saied’s thirst for power. The US Department of State, which has invested more than $1.4 billion in Tunisia since 2011, continues to voice its concerns. “Tunisia must not squander its democratic gains. The United States will continue to stand on the side of Tunisia’s democracy,” reads a statement by the State Department issued in the aftermath of the July 2021 power grab.

The European Union recently announced it would allow Tunisia to borrow 450,000 Euros ($490,000) to recalibrate its finances. However, the EU has a long history of imposing conditionality clauses on its foreign assistance to countries that don’t meet the EU’s rule of law standards, a likely scenario for any upcoming deal with Tunisia.

President Saied is facing a tumultuous road ahead to say the least. While he may have enjoyed a considerable amount of popularity in the early days of his power grab, those days are quickly fading. History has shown us that Tunisians are a resilient people ready to go to great lengths to achieve their goals. Saied’s political inexperience will not serve him well while handling big institutions and international organisations, deeply hurting the country’s economy. This will not go unnoticed in the country that launched the Arab Spring. 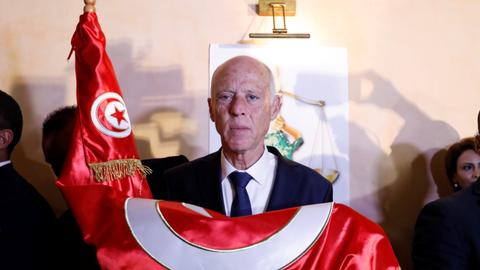