UK-Turkey ties are unlikely to shift significantly after elections

Bilateral relations between both countries share essential long term strategic security and trade ties. After the elections this relationship is set to continue.

Coincidentally, the announcement in Turkey was made exactly one year after British prime minister Theresa May called for snap elections in the UK.

A recent visit by President Erdogan to the UK in which he met with May as well as the Queen saw discussions on bilateral, regional and international issues, the latest developments in Cyprus, and the "joint action plan" in the Middle East regarding Syria, Iraq and Iran.

The focus, however, was largely on increasing Britain-Turkey trade and requests from the UK that Turkey uphold its international obligations of respecting political freedom and expressions. After the election results this month, it's unlikely the UK will be looking to redefine its “strategic” relationship when security and trade is the basis for their maintained relations.

The main reason for bringing elections forward was to secure the internal political scene ahead of a regional settlement on Syria and consolidate the transition to a presidential system ahead of economic turbulence.

Presidential and parliamentary elections will be held for the first time since the failed coup of July 2016. As one of the first to express solidarity following the coup, the UK’s esteem in the eyes of Ankara has been wholly positive and enriched the prospects of its strategic relationship.

Several ministerial visits between Ankara and London have taken place which also include that of foreign minister Boris Johnson who called for a "jumbo" post-Brexit free-trade deal with Turkey despite once delivering a derogatory poem about Erdogan.

The UK’s response to the failed coup was one of a unique position of “understanding” which was described by the UK’s Foreign Common Wealth Office (FCO) as “a central and distinctive feature of the UK’s relationship with Turkey” grounded also on “respect, engagement at all levels and a clear understanding.”

Turkey’s economy and demographic potential is too dear for the UK to ignore. Almost 80 million make up Turkey’s youthful population, with numbers expected to exceed 84 million by 2023. The UK's access to long term financing and with a specialisation in the service sector make Turkey an attractive investment proposition.

Turkey and the UK are also working on developing the first indigenous Turkish fighter jet with BAE Systems which will develop future-generation combat aircrafts for the Turkish military as part of a long–term contract between the UK and Turkey that will also include technological transfer between the long term allies. The hopes is that this will be the first of many lucrative contracts not only in the arms industry, but also in the pharmaceutical, chemical and technology sectors.

Bilateral trade volume between Turkey and the UK amounted to $17 billion dollars in 2016 contributing to a 6.3 percent increase compared to the previous year, with hopes that the figure will reach $20 billion by 2020.

Turkey is the UK’s 19th largest export market and exports more to Turkey than it does to India, Russia, Brazil or Mexico. Post-Brexit, economic relations between the two countries will take greater importance as Britain tries to expand its international trading role.

The UK and Turkish governments have reiterated their intention to expand their trade and investment ties after next year’s Brexit presenting new opportunities for better economic relations between Turkey and the UK in light of their respective trading relations with the EU.

A marriage of convenience

The past few years has seen increasing friction between the EU, the United States, Russia and Turkey which has encouraged the UK to distance itself from the positions of the EU and other western states in order to maintain its strategic alliance with Ankara.

The UK could also play a crucial mediating role between Ankara, the EU and the US.

Just as with trade, security is another key component for the existing partnership that is unlikely to change after the election. Collaboration between the two states is vital to European and Middle Eastern stability.

Turkey has also proven itself a worthy strategic partner following the “irregular migration” issue that occupied much of 2015 and 2016 after Turkey became one of the main exodus routes for migrants and refugees.

Expanding trade and defence ties between the UK and Turkey gives leverage to the UK in Ankara to raise its own concerns, but which they believe, does not threaten the complimentary interests of both security and prosperity.

It is unlikely that the theme of strategy that defines the bond between these two nations will weaken after June when the confines of trade and security, issues that will remain, is what maintains their bond. 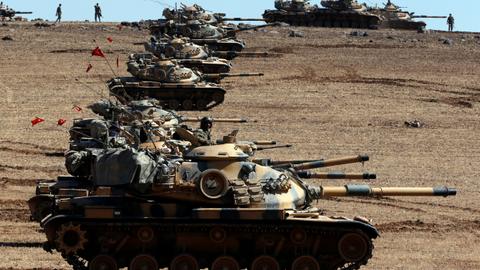