Hindu nationalists’ attempt to brand dissent as “anti-national” is a well-worn diversionary tactic, and has been deployed against religious minorities of every stripe to devastating effect.

The BJP’s ‘anti-national’ discourse has had a devastating effect on the country’s religious minorities. The latest attempt by Hindu nationalists to brand India’s protesting farmer movement as part of a Sikh separatist movement is the latest page in the BJP playbook that has only made life miserable for minorities in Modi’s India.

Indian Prime Minister Narendra Modi’s playbook for crushing dissent and maintaining a grip on political power is not only well established but also as dangerous as it is deceitful, and one can trace a through line in the rhetorical devices his government has deployed to divert attention away from its scandals and failures.

When the chips are down, Modi and the party he leads – the Bharatiya Janata Party (BJP) – mobilises Hindu majoritarian sentiment and blames “anti-national” and external forces to divert attention from their misdeeds, missteps and miscalculations.

The data shows this discourse is having a devastating effect on the country’s religious minorities.

When farmers in Punjab and Haryana began verbalising their opposition to laws that would effectively pave the way for the corporate takeover of the agriculture sector, leaving their farms and communities destroyed, the Modi government gambled that their protests and pleas would largely be ignored by the big metropolitan-centric news media. It would turn out to be an error of profound misjudgement.

Farmers began protesting en masse throughout Punjab, Haryana, Uttar Pradesh and other states, before converging into one protest at different border points on the way to New Delhi, demanding the repeal of three laws enacted by the government to regulate and control farming activities.

Faced with hundreds of thousands of protesting farmers and a growing national and international news media storm, the Modi government set up a series of roadblocks with heavily armed security forces to prevent them from reaching the capital.

When footage of security forces beating and shooting unarmed and impoverished farmers beamed into the living rooms of hundreds of millions of homes throughout the country, the Modi government suddenly had a political crisis on its hands, but instead of promising to address farmer concerns, it turned to stirring Hindu nationalist sentiments by blaming “anti-national” and foreign forces.

First, BJP leaders tried smearing the protesters as part of a Sikh separatist plot hatched by Khalistanis and Sikh expatriates. While such a movement existed more than three decades ago, it no longer enjoys popular support among Sikhs in India today.

“Branding protesting farmers as Khalistani supporters, the regime has already revived the Hindu vs Sikh division of the 1980s. There have been already many hate comments on social media platforms against Sikhs by the regime supporters,” Ashok Swain, a professor of Peace and Conflict Research, told me.

“Unlike Muslims, Sikhs are better organised and there will be retaliation to these provocations. So, the hate crimes in India, which were mostly directed against Muslims, Christians, and Dalits in the last 7 years, is now going to target Sikhs as well.”

Muslims have also featured at the centre of BJP and right-wing media generated conspiracies, with some claiming that “jihadists” and Pakistani “terrorists” have embedded themselves among the protesters to sow chaos and havoc.

It’s the same narrative the government used to suppress nationwide and secular protests against its anti-Muslim citizenship bills, known respectively as the Citizenship Amendment Act and National Register of Citizens. This discourse reached a crescendo when more than 50 Muslims were hacked, burnt and shot to death during the Delhi Riots of February 2020.

It shouldn’t be forgotten that the Modi government also scapegoated Muslims for spreading Covid-19 to divert attention and dodge accountability for its failure to heed World Health Organization warnings about the approaching pandemic, as anti-Muslim conspiracy theories went viral on social media.

As noted by Swain, efforts by Modi and BJP to stigmatise protesting farmers as part of a secretive anti-nationalist plot hatched by Sikhs and Muslims is likely to produce yet another upward surge in religious motivated hate crimes in India.

Recall that 90 percent of hate crime incidents in the decade spanning 2010 to 2020 have occurred since 2014, the year Modi came to power, with Muslims the target of 78 percent of attacks.

Where the BJP rules...

The correlation between hateful Hindu nationalist, or more specifically Hindu supremacist discourse and religiously motivated hate crimes is irrefutable, as demonstrated in a study conducted by the University of Massachusetts, which found a direct relationship between the number of hate crime incidents and the total share of the vote BJP received in the 2014 election.

The authors of the study identified three mechanisms that have generated an increase in hate crimes against religious minorities in BJP-ruled states, including laxity of state-level law enforcement, economic competition between religious groups and the way in which social media has amplified anti-minority rhetoric and conspiracy theories.

It’s thus no coincidence that more than two-thirds of anti-Muslim hate crimes occur in states ruled by BJP, and thus why there’s likely to be upward spike in attacks against Sikhs, Muslims, farmers, journalists, students and anyone else smeared as “anti-national.”

“There is now a high risk of gross human rights violations in India,” Arjun Sethi, a human rights lawyer and law professor at Georgetown University, told me.

It’s for this reason, Mr Sethi and forty other US-based human rights lawyers of South Asian descent have published an open letter to President Joe Biden, calling on him to denounce the Modi government’s use of force against protesters, insist that the right to peaceful assembly and expression be fully respected, demand the immediate release of all protesters and journalists, and ensure that India restores the free use of telecommunications, the internet, and social media channels.

The Modi government must start acting like the international community is paying attention to the way in which it’s responding to the farmers' protest, because it mostly definitely is. 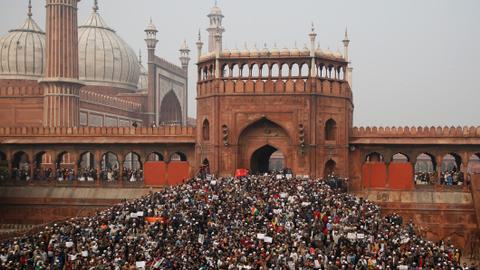