What is South Africa’s ‘inevitable showdown’ really about?

This crisis presents the chance for the government to accelerate the undoing of the country’s corruption and apartheid inheritance — otherwise risk its survival.

The scenes of looting, destruction and apparent protest witnessed after the jailing of former President Jacob Zuma lead to one point: the showdown in South Africa was inevitable and necessary from the moment we realised the depth of corruption and state capture and that our leaders needed to be held accountable as a precondition for renewing the African National Congress (ANC) and revitalising our country.

There is no doubt that, fundamentally, South Africa’s economic and social inequality is an inheritance from Apartheid, and because of that, we remain a fragile society that requires not self-serving leadership, but one that demonstrates it’s hard at work uniting and developing the country with integrity and competence, rewarding the patience of the poor (mostly Black) and regulating commitment from the rich (mostly white).

In the absence of these, a revisionist narrative has emerged claiming that Nelson Mandela and his cohorts sold out in 1994, rubbishing a century of heroic struggle. This narrative ignores that we merely won a beachhead and that our first priority was to prevent counter-revolution, otherwise we would be telling — as in Egypt — our story from jails and graveyards.

Our cohesion weakened when leaders themselves wanted power and riches immediately, setting off a culture of impunity.

The ANC’s Polokwane Conference was the political fountainhead that gave impunity a political form – populism: to die or kill for a leader; to malign a woman for reporting rape; to seduce the politically restless and economically vulnerable with Radical Economic Transformation all while carrying out the most heinous acts of corruption.

This was preceded by subverting institutions: security institutions to escape accountability, then economic entities for capture, culminating in the storming of the Treasury.

The volatility was endemic: “service delivery” protests about the distribution of basic resources like water, electricity and housing accompanied the sense that government was corrupt and incompetent. We denied and tolerated the xenophobia underpinning repeated attacks on foreign nationals. The increasingly violent nature of crime spoke of a decentering of our morality.

But all of these needed a cause and a spark. Could it be the apparent martyrdom of Jacob Zuma?

The most comforting outcome of the last decade is that the Constitution and its institutions buckled but did not break: our judiciary remained activist in instinct; our previous Public Protector gave her office some teeth; our media remained investigative and a worthy watchdog; and civil society occupied their constitutional space and remained vigilant.

All of these were instrumental in the fightback against corruption and state capture and culminated in the Zondo Commission, forcing the ANC itself to start dealing with these phenomena.

But ANC leadership itself was the theatre of conflict. The ANC, in its century of existence, has often faced many crises, but never faced a moral, even existential, crisis like now.

Jacob Zuma ascended to power with a motley coalition of contradictory forces stapled together by common injury. The ANC was not just morally compromised, but organisationally re-peopled by the avaricious and strategically re-purposed to serve the state capture agenda.

The depth of this fundamental denaturing of the ANC will indicate whether it could be salvaged. The ANC has begun its renewal under the leadership of Cyril Ramaphosa, and has understood that unless it is unequivocal about corruption, it will not survive.

Until now, the ANC balance of forces was far too even, and shifting it meant neutralising Zuma’s original enablers: expelling the populists, like those who formed the Economic Freedom Fighters (EFF) party; and building cases against those who think themselves too big to fail, like Zuma and his chief enforcer, Ace Magashule.

The state also had the painstaking task of unpeopling Zuma’s appointments in, for example, law enforcement, so that proper investigations, credible cases and deserved punishments could be mounted.

When their high priest, Jacob Zuma, was jailed, and they feared they would soon follow, the populists attempted a last and desperate showdown. They lit a powder keg of looting and destruction — driven through criminal violence — among already devastated people, while other operatives sought to devastate economic infrastructure, like the ports and refineries — an attempt at counter-revolutionary violence.

This moment in South African politics is a watershed: Will impunity be tolerated or reversed? Can such extremism be appeased or must it be defeated? Are there peaceful options or must the nation brace for more bravado and force? And must the ANC continue to prioritise purification and renewal over unity and sentiment?

This is what the showdown is about, and its price is already high.

The hesitant, delayed, uncertain response from the state has many possible causes: from the cynical (can ministers and officials themselves in the firing line for corruption act decisively?) to the pessimistic (has the state been so fundamentally denuded of resources, talent and capability that it could not mount a counter-offensive?) to the procedural (the state needed parliament to permit the use of the military).

But after a week of anarchy, a plan is emerging. The state is deploying 25,000 soldiers to quell the looting. Legal action is being prepared for both key instigators and ordinary looters so that impunity no longer goes unpunished.

The rump of South Africa’s security and law enforcement agencies remain loyal, even if somewhat flat-footed. But the showdown is being met.

This must be the opportunity to purify the ANC and rid it of the corrupt and the compromised, but must be accompanied by a comprehensive economic recovery from South Africa’s pre-Covid-19 recession and the coronavirus-induced economic crisis, as well as the devastation of corruption and state capture.

This is a moment of thoughtful policy review that must also accelerate the undoing of our Apartheid inheritance – neither desperately populist nor blindly orthodox – but using a global moment of review about the faultlines revealed by Covid-19.

President Cyril Ramaphosa seems to have gained in confidence and courage, and appears up for the fight. He has to succeed otherwise South Africa goes down the path from fragile to failed state.

The president knows this is the price of failure, and he now knows that the balance of forces in the ANC and society is in his favour, therefore slowly gaining control over the levers of power in the ANC, in government and society. Ebrahim Rasool is a former leader of the ANC and Premier of the Western Cape. He was SA’s Ambassador to Washington, and today leads his World for All Foundation. 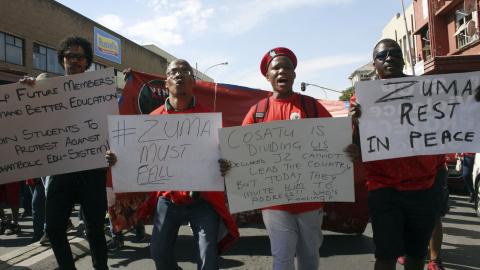 Is South Africa's ruling party headed for a split?