What should we think about that ‘Indian Matchmaking’ show on Netflix?

The Netflix series reflects uncomfortable truths not only about prejudice in India, but is also a reminder of how global those prejudices are.

The first thought that came into my mind when I saw ‘Indian Matchmaking’ pop up on my Netflix recommendations was “this is going to be horrible.”

It wasn’t because it was another reality show, or especially another one about finding love, but because it was going to highlight entrenched patriarchal ideals in Indian culture, to people who may be blissfully unaware. I was worried about the judgement that would come with it.

I had to sit with that for a while and evaluate my reaction. It became very evident that I was trying to protect the problematic nature of traditions in my culture. After watching a few episodes, I came to realise that it wasn’t just the traditions of my culture that I was ashamed of, but the values of love, globally.

The way love is defined changes over time, alongside our accessibility to the world; one screen swipe away.

Many of us have used a dating app to find someone to connect with, and just like the ‘biodatas’ (like a resume but with your skin tone) many of us have filled out similar details on our Tinder account.

Our height, weight/build, sexual preferences, religion, education - the list goes on. And as this list seems simple to many, it’s the same list that Sima Aunty puts together for each of her client’s ‘criteria’.

But the problem here lies inherently in the patriarchal system that values certain beauty standards over the gravity of a woman’s worth. This system is global and established politically as well as socially.

Traditions in India have perpetuated these ideals to an unhealthy standard, which explains why the biggest selling beauty product in India is a skin lightening cream.

The skin lightening obsession is perpetuated by the Indian caste system, which consists of the wealthiest at the top - the lighter-skinned Indians, while the bottom has the darker-skinned poorer community, who are heavily mistreated.

The caste system combines inequality of wealth, colourism, within religion and education - all of which is based around patriarchal methods of governing. This is controlled with arranged marriages.

It’s made evident very soon into the show that wealth inequality and caste will not be mentioned. Arranged marriages are discussed as if the cruel ideals of being fairly well off and from a certain caste isn’t the very origins of these bonds.

The ‘shortlist’ is usually of someone with money, from your religion, caste and with fair skin - it is undeniable that these are requirements based on injustices.

And these injustices are global.

We watch as our non-black friend judges those on ‘Indian Matchmaking’, only to say she doesn’t date black people while swiping on an app. These aren’t preferences, these are requirements to maintain injustice, and we are all complacent to it. Exercising preference, for instance, would be wanting someone who isn’t rude to waiters. Choosing someone based on the colour of their skin is prejudice.

‘Indian Matchmaking’ had an overwhelmingly Hindu and Punjabi cast, with no mention of Muslims or same-sex relationships.

While Sima Aunty asked the Punjabi Rupam whether she must marry a Sikh, she never listed a Muslim as a potential lover. While there is nothing wrong with wanting to marry within your religion, there’s also nothing wrong in merely suggesting other religions in an attempt to normalise the act itself.

Same-sex relationships were decriminalised in 2018 when Section 377 was scrapped from the penal code, allowing people in India to legally love who they want.

While a change in legislation is monumental, it’s not until the act itself is normalised will people begin to feel any sense of equality. I say that, but I'm not sure I would want a same-sex couple to have to go through the trials and tribulations of this show.

The series was triggering to a lot of South Asian women, especially to those who are unmarried.

As a queer Indian woman in a relationship with a white woman, I felt a deep anxiety stir in my bones every time Preeti (Akshay’s mother) spoke. The disappointment and pressure the mother had were inflicted directly onto her son, but don’t forget it was once inflicted on her. What she is passing down is untreated trauma.

Despite knowing this, it was still difficult for me to watch. I wanted to turn to my white friends as they reacted and explain everything but at the same time, I wondered why I was defending these antiquated processes.

While many have said that arranged marriages do indeed work, they tend to be valued against divorce rates instead of the amount of happiness gained. While these things are unmeasurable to a certain extent, there are a lot of nuances within this to explore.

The idea of cohabiting and creating life with another person doesn’t sit well with some because having a family is inherently the driving force for our economy, not for love. The show makes this more evident than ever.

While all the values are laid out on the show, like a performance, I see people exclaim that it’s “a problem in India” and “about Indians”, but ‘Indian Matchmaking’ makes it clear that some of these abhorrent values are broadly shared.

While we shake our heads in disgust when Aparna says...well anything, we’re telling her that she’s not allowed what she wants (or doesn’t want), because she shouldn’t be so picky.

I say be picky. Yes, I found her irritating, but that doesn’t mean she doesn’t deserve to ask for what she wants. We call women picky, bossy, angry, opinionated and men always “know what they want.”

So while ‘Indian Matchmaking’ is fun to watch for many, and a cringe fest for others - the overall question that looms over our heads is whether we are allowing the values of colourism, sexism, Islamophobia and anti-blackness that are emphasised in this show, to dominate our individual lives. Sharan Dhaliwal is a writer, editor of Burnt Roti magazine and director of Middlesex Pride. 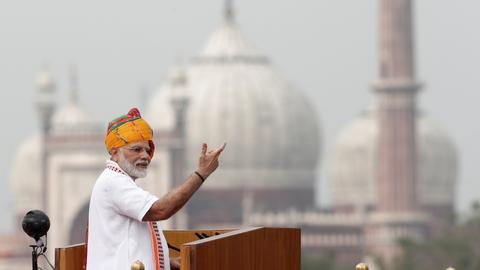