Who can lay claim to Jerusalem?

Declaring Jerusalem as the exclusive property for any one religion or group of people violates the spirit and the history of the city.

To discuss the US president’s decision to recognize Jerusalem as Israel’s capital and moving the embassy to Jerusalem requires some context.

And there are a lot of contexts to choose from.

I will share the context of the “win-win solution”. The sea change that is happening in Israel now, the context of scripture, tradition, and history - which are far removed from the news cycle, spin and political declarations, and fit in more with the lives of the people of the Middle East.

A quiet undercurrent is permeating many segments of the Israeli public, and that is a desire for win-win political solutions with the Arab and Muslim world.

Eschewing triumphalism, many Jewish leaders are looking to expand the narratives here to include the various perspectives from Arabs and Muslims, creating the only sustainable peace that can be - a peace in which all sides win.

I am proud to say that Sabbath-observant Jews are at the forefront of this sea change, Sabbath observance being the touchstone of Jewish observance, as salat and zakaat — prayer and charity  — are the touchstones of Islamic piety.

Yehuda HaKohen made his own set of controversial statements - “#let’s-cut-free” is his slogan to rid Israel of military aid from the United states, and for Israel to stop acting like occupiers in the areas of Yehuda and Shomron, also known as the West Bank. If you do not want to be seen as a colonialist - don’t act like one. He promotes a grassroots middle eastern culture in which Israelis and Palestinians are an organic part, and in which all sides win.

Gavriel Reiss invites Israeli Jews to deepen their appreciation of Judaism by learning about the Islamic tradition: “Muslims still declare the month by sighting the new moon, like Jews used to. You know what? I am jealous!”

The late Rabbi Menachem Froman, Rabbi of Tekoa, went so far as to meet with leaders of Hamas, drafting the Froman-Amaryeh peace agreement that has so far been ignored by political leaders.

Those who follow Abrahamic covenants, whether Muslim, Christian, Jew or unaffiliated monotheist (“Sabean” in Islamic parlance, “Noahide” in Judaic), live daily lives in tandem with their special sense of sacred place and time. As a Jew, of course, Jerusalem is my personal spiritual capital.

Do I need the world to say so?

The strength of my spiritual focus is rooted in scripture and tradition. Politics come as a far second to that.

Does a Muslim need the whole world to declare when the month of Ramadan begins and ends?

There is a reality to sacred time and place that belie any need for validation the world over. I can live without it, personally, and that is what my husband Ben Abrahamson said when asked if President Trump's declaration on Jerusalem as the capital of Israel matters to him personally.

Ben also said that we must regard Jerusalem as a place of prayer for all peoples.

Triumphalism is impossible in the varied texture of Middle Eastern culture. Jews who see Jerusalem as their personal spiritual capital owe a debt of gratitude to Islam itself for restoring its sanctity.

In the seventh century, Caliph Umar seized the city from Roman Byzantine rule, cleaned the Temple Mount/Haram al Sharif, and brought seventy Jewish families to live there, after the Temple Mount had been used for waste disposal and after Jews had been banned from Jerusalem under the Byzantine Romans.

From a traditional Jewish perspective, the actions of Caliph Umar reflect the role of Ishmael, the older brother who gives support to his younger brother Isaac: when the brothers buried their father Abraham in Hebron, Ishmael actually deferred to Isaac, although Ishmael was older and should have led.

This was a symbol of the role of Ishmael as supporter and protector to anyone who lives by a holy book and prophets. The children of Ishmael - spread all over the world in a spiritually activist bent - are supposed to be the spiritual protectors of the children of Israel – a tent dweller, intensely studying the holy books.

In Islamic tradition, Jerusalem is the third most holy city, after Mecca and Medina. Many of us have forgotten that it is the third holy city in Islam precisely because it is the first most holy place for the children of Israel, and Muslims are enjoined to protect and support other monotheists.

In Arabic, Jerusalem is called “al-Quds” - the holy, a reference to the Temple of Solomon, which served as a house of prayer for all nations, and perhaps a hope for what can be - it can be a holy place, we must not let media spin or inflammatory rhetoric get us off the course of a shared history in which people of the book have always lived in symbiosis.

Anyone who tries to claim Jerusalem only for themselves, exclusively, is mistaken.

So, steeped in our traditions, the faithful have a certain buffer between themselves and up-to-the-minute political declarations and media spin.

But we do live in the real world. And I was admittedly very relieved to hear a win-win message in president Trump’s speech. The president stated,“….We want an agreement that is a great deal for the Israelis and a great deal for the Palestinians…we are not taking a position of any final status issues, those questions are up to the parties involved.”

Here is what he said of the Middle East: “Its people are brilliant, proud and diverse, vibrant and strong.” That brought a lump to my throat.

If the children of Israel and children of Ishmael can reconnect with our divinely bestowed roles  - we are not competitors, instead, we are meant to work in harmony - then our reaction to up-to-the-minute news reports and inflammatory media spin, designed to increase ratings and sales and not to promote peace - will naturally take second place. We will not act in a tit for tat manner. Triumphalism is not an option, and will naturally fade in light of our G-d given, diverse roles.

Jerusalem remains a place of prayer for all peoples, and Muslims and Jews knew that already. Rebecca Abrahamson is passionate about sharing the true, peaceful message of Islam, and writes a column: "Giving Voice to Muslims who Seek Peace" for two news services. 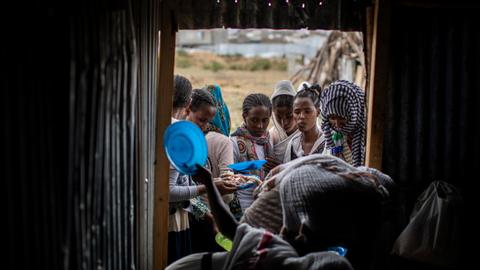