Studying racism should be a communal venture into exploring difficult pasts and unexpected connections.

“We Algerians have a serious racism problem,” a fierce young Algerian woman said into the microphone, as an older Algerian man confronted her with rage from the foot of the stage. She pointed to the suppression of Berber (Tamazight) language and discrimination against migrants from Mali, while he ranted that there’s no racism in Arab culture. “Not true, and plus Algerians aren’t Arab,” she retorted, raising the stakes of the exchange.

This charged encounter at The International Conference On The Black Arts Movement in the US and Algeria at Abd el Hamid Ibn Badis University, where I was invited to give a keynote on the 1969 Pan-African Cultural Festival in Algiers, is just one of a number of global conversations on racism I have been fortunate to witness recently – from Algeria to China, where I live and teach.

As an American professor abroad, I felt compelled last fall in the wake of George Floyd’s murder to host the first event in China on racism in the US to deepen our students’ understanding of contemporary American society and prepare them to study there.

And how better to do that than to invite civil rights legends themselves to speak directly with our students – like Dr James P Garrett, a veteran Freedom Rider who organised the nation’s first Black Student Union and led the historic strike of 1968-9 at San Francisco State College that led to the establishment of the first Black Studies department in America.

Over 300 of our students showed up on a Saturday night to hear Dr Garrett speak with another history-making hero from the Student Nonviolent Coordinating Committee: Courtland Cox, who helped organise the historic 1963 March on Washington, registered thousands of African Americans to vote in the south around the time of the Voting Rights Act, and served as a representative to the War Crimes Tribunal on Vietnam with Jean Paul Sartre and Simone de Beauvoir.

From Dr Garrett, our students learned about the history of Afro-Asian solidarity in the civil rights movement. He explained that when he started the inclusive Black Student Union, members did not have to be black or even a student, and Asians played an early and integral role in efforts to establish Ethnic Studies. Our students got a kick out of Mr Cox discussing the exciting changes he has witnessed since the first of his many trips to China in 1983 and his role in negotiating the construction of the Chinese Archway in Washington DC.

Now our students are more knowledgeable about the long history of Chinese and African American solidarity, which Professor Yunxiang Gao documents in her upcoming book, Arise Africa, Roar China. W E B Du Bois, Paul Robeson, and Langston Hughes were helped on their trips to China by Chinese allies — like journalist, musician, and Christian activist Liu Liangmo, and Sino-Caribbean dancer Sylvia Si-lan Chen.

In fact, when poet Langston Hughes visited Shanghai in 1934, he found the International Settlement separated from the Chinese sections of Shanghai by barbed wire and American race segregation laws.

This spring, my students and I enjoyed reading Hughes' 1938 anti-colonial poem, “Roar, China!”:

Open your mouth, old dragon of the East.

To swallow up the gunboats in the Yangtse!

Swallow up the foreign planes in your sky!

And spit out freedom in the face of your enemies!

Decades later, Chairman Mao would declare in 1968: “On behalf of the Chinese people, I hereby express resolute support for the just struggle of the Black people in the United States.” And Black Panther founder Huey Newton said of his time in China: “I felt absolutely free for the first time in my life — completely free among my fellow men.”

After our event on the roots of American racism and resistance to it, one of my students remarked: “It was a very meaningful and unforgettable night.  It not only broadened our horizons but also offered us an invaluable chance to communicate with friends in America.” Another noted: “What an honour for us to have the opportunity to share our ideas with such distinguished experts! Those were two of the most meaningful hours I spent this year.”

Towards a global dialogue

When my students asked me to explain American stereotypes about Chinese people, each stereotype was met with quizzical looks. “Why do you think we’re good at math!?!” one of them asked. Racism defies logic, so trying to explain such stereotypes can feel awkward if not impossible. As my students contemplated going from a majority to a minority, some reflected on ethnic minorities in their own country. In the midst of so many physical attacks on Asians in the US this year, it pains me to hear my Chinese students express their fears of studying in America.

Here in China, I myself am a minority and a foreigner, and I cannot imagine being assaulted for the way that I look or the passport I carry.  I have been touched by the tremendous kindness I have received everywhere I have wandered in China, and I wish for the same for my students.

To study race, of course, is to study the history of the world. In my course on Africa, my students and I explore China’s 15th century encounters with East Africa and the modern-day Chinese diaspora in South Africa. Black culture is popular with educated Chinese youth – I have students who named themselves LeBron and Jay-Z, and when I was invited by the Communist Youth League to judge our student singing competition, several students chose to sing hip hop and rap songs.

In our globalised world, solidarities appear when you least expect it: at a going away party for American journalist Peter Hessler at a brewery in Chengdu, I spotted a young Chinese woman sporting a bag with the words: “GAZA ON MY MIND.”

The current hysteria in America about studying race is sadly not a new phenomenon.

A few years ago, when I was an Islamic law fellow at America’s top law school, I was told by my boss that I was not permitted to research Malcolm X’s speech at that same law school. A former dean called the Algerian War of Independence against French colonialism and widespread torture a battle of the “civilised” (French) versus the uncivilised (Algerians) – same for the Iraq War. These same law professors mocked BDS, blamed the decline of American education on minorities and women, and declared that Islam has no love in its religious tradition.

The embarrassing debate in America about teaching race and our own nation’s history is hastening the decline of its reputation abroad and the deterioration of our public discourse, speech freedoms, and educational ideals.

In a globalised world, dialogue across differences is more important than ever, and we have so much to learn from one another. From my students at the American University of Beirut, I learned more about Israeli apartheid and from my students in Oman, the history of the slave trade in the Persian Gulf.

Studying racism need not be a parroting of talking points, but a communal venture into exploring difficult pasts and unexpected connections.

As one of my students wrote after our event on American racism: “It is a fundamental respect for life not to politicise races. To handle the problem, maybe teaching everyone to think for himself is the best solution. Only education can save the world.” 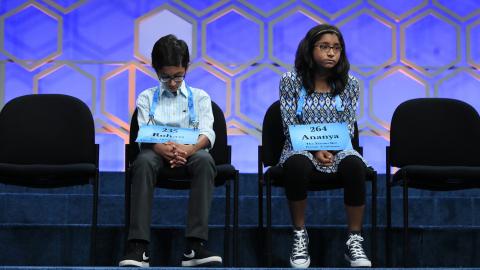 The damaging myth of Asian-Americans as a model minority