US president Joe Biden claims he wants to prevent migration from Mexico and Central America by addressing its root causes. However, to do that, he would have to crack down on the US’s own violent and exploitative role in the region, and that isn’t the plan.

In February, Biden issued an executive order to “address” and “manage” migration in North and Central America. It argues that “violence, instability, and lack of opportunity” should be rectified in order to prevent people fleeing their country. Addressing the root causes, it says, involves combating corruption, promoting respect for human and labour rights, preventing gang violence, and addressing economic inequality.

The order also intends to “expand Central and North American countries’ ... resettlement capacity; and increase opportunities for vulnerable populations to apply for protection closer to home.” That means resettling refugees in Mexico and Central America.

Biden’s policy for Central America also includes a US $4 billion plan to supposedly address “factors driving migration”. They however involve “reducing barriers to private sector investment” and “ensuring labour practices do not disadvantage competition”. As usual, this “aid” comes with conditions, where the US orders receiving countries to “undertake significant, concrete, and verifiable reforms”.

These policies paint the US as the saviour of a giant and long term crisis that it was in fact a key contributor to. They are a cover-up for decades of the US’s looting and intervention in the region, and they are a thin disguise for the US government’s patronage of its transnationals. They overlook the fact that the US isn’t qualified to promote human rights or solutions to violence.

The corporate occupation of Mexico and Honduras

There are 6,000 maquiladoras (mostly export-oriented and foreign-owned factories) in Mexico, and 90 percent of them are near its border with the US. There are hundreds more of these factories in Honduras.

The factories take advantage of cheap labour, low to no taxes, and cheap utilities and leases, while sending the profits back to the US or Europe. Across Central America, 263,000 women, and a slightly lower number of men are exploited in textile factories, for example. In Honduras, these workers earn just 67 percent of the basic income needed to survive. But what they make will sell for higher prices in the US. A football shirt selling at US$25 for example, sees the worker earn 8 cents. The conditions in these factories are appalling; the shifts last 12 hours with no breaks, and the factories are very hot and unventilated.

Likewise, US transnationals like Dunkin and others like Nestlé are benefiting from super-exploited child labour in Honduras. “These companies are paying coffee growers a quarter of the real value of coffee,” Fernando Morales from Cafe for Change told TRT World.

The business model is “cruel, inhumane, and illegal … and causes an increase in forced migration,” he said. Children are paid 10 cents per pound of coffee picked, and growers receive less than 1 percent on average of what consumers pay for a cup of coffee.

In Mexico, Constellation Brands has forced workers to keep going through the pandemic, in order to maintain their “commitment” to US consumers. A single plant of the beer manufacturer uses up water for 600,000 homes, pushing locals to desparate margins. In the arid northern region of Mexico, thousands of other factories do the same.

The US has been developing its transnational empire of car, arms, soft drink, and other manufacturers in Mexico since the 1960s, intensifying in the 1990s with NAFTA. Its border with Mexico is really about maintaining a very low-wage labour force so that the factory colonies can maximise their profits in a system of tolerated abuse.

In Mexico, most US-owned factories are located in industrial parks, and Honduras is developing what it calls ZEDES; zones where companies aren’t subject to taxes or laws.

There are around 100 industrial parks in the state of Nuevo Leon alone. These parks are a market in themselves, with companies competing to get access to land in them. Mexican real estate company FINSA is authorised as an operator of some industrial parks, and that involves managing their perimeter control, closed-circuit security, and infrastructure. Often, this private company ensures that only workers or staff can enter the zone.

Mexico’s science and technology council, Conacyt, has identified 50 regions in Mexico that it refers to as “environmental hells”, and they are all located near or in these free trade industrial parks, where “the territories have been abused … with little regulation from the government.”

Honduras’ ZEDES are totally privatised territories that are also managed for the US and other foreign corporations. Companies can do whatever they want there and are protected, while people and the environment aren’t. So far they are more a policy than practice, though a ZEDE is being built on the island of Roatán, off the coast of Honduras.

Meanwhile, most transnationals in Honduras are concentrated in El Valle de Sula. Their settlement there dates back to the banana plantations run by the US’s United Fruit Company and Standard Fruit Company, which also paid barbaric wages.

The US government’s support for these companies is codified into trade agreements that facilitate the desecration of Central America and Mexico.

The lead up to NAFTA for example, saw Mexico passing a foreign investment law which, in 1993, saw 91 percent of its economy opened up to foreign ownership. NAFTA also wrecked Mexico’s small farmers and forced it to import its staple food – corn, and so much more. USMCA, the new NAFTA, has led to increased spending on industrial parks, with the construction of new factories and storage already going ahead in the key “markets” of Tijuana, Monterrey, Tecate, Mexicali, and Saltillo.

Likewise, the Bilateral Investment Treaty signed between the US and Honduras aims to give US businesses the best possible conditions (i.e. low taxes and wages) in Honduras. Also, the US-Central America Free Trade Agreement (CAFTA-DR)  “aims to eliminate tariffs within Central America and facilitate increased regional trade, benefiting U.S. companies that manufacture in Honduras.” It means that nearly all textile products that US companies make are duty-free, with no benefits for Hondurans.

These sorts of unequal economic relationships go back centuries and lead to extreme poverty in one region, while wealth accumulates in the other. They are one of the main causes of economic migration, but it's highly unlikely that Biden will be changing them.

Solidifying that inequality, the US also has a long and recent history of orchestrating and supporting coups and military intervention in Latin America in order to maintain its control here.

When US transnationals turned Honduras into a one-crop economy (bananas) in the 1910s, the US government also intervened militarily in 1907 and 1911.

By the 1980s, US political and military control of Honduras was so strong that it was often referred to as “USS Honduras”. The Reagan government used its military bases in Honduras to support the contras against the Nicaraguan revolution. And when left-leaning president Manuel Zelaya began implementing policies to combat poverty in Honduras, the Democrat-run US refused to condemn the coup that was orchestrated against him in 2009, then supported the election that legitimised the post-coup government.

Now, a trial is being held in New York which is damaging the reputation of the current president of Honduras and many of his allies.

“I don’t think the US wants to change the status quo or implement structural change in Honduras. Instead, they want to remove their pawn [the president] who isn’t useful to them any more. They’ll make changes but they will leave a structure in place that is based on extractivism,” Jorge Madrid, a Honduran political refugee living in Mexico City told TRT World.

The Democrats and the US “are the causes of the problems we are facing now,” he said, referring in particular to the role of Biden in the 2009 coup.

Biden’s executive order claims it wants to prevent “violence, extortion, and other crimes perpetrated by criminal gangs,” while his country continues to dominate global weapons production. Its authorised arms exports were worth US$175.08 billion last year, and such exports are approved based on if they “further U.S. foreign policy and national security interests.”

Around 70 percent of Mexico’s guns come from the US – a situation which dates back to the start of the so-called “war on drugs” in 2006 and the US and Mexican militarisation of the region. Thanks to this policy, cartels grew by 900 percent between 2006 and 2012 in Mexico.

The US is not in a position to end the violence it caused in the first place. Rather than pretending to help this region, the US is indebted to it. It owes reparations and should respect the region’s sovereignty. 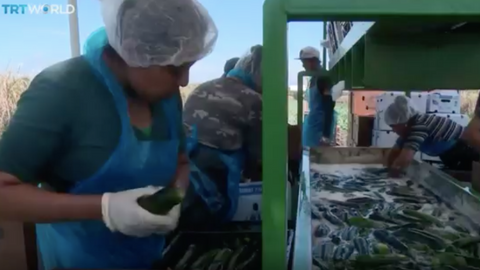