These are images of some of the most important stories of the year.

Known as the 'Latin American Trump', Bolsonaro wants to take Brazil out of the Paris Agreement on climate change, angering environmentalists.

Macedonia's long running dispute with Greece came to an end as it agreed to change its name to the Republic of North Macedonia.

Athens had long argued that its small, landlocked neighbour's name implied claims on the northern Greek province of Macedonia, and on ancient Greek cultural heritage.

The resolution helped secure its entry into NATO.

An Indian pilot was captured by Pakistani forces after his jet was shot down in Pakistan's airspace.

An Ethiopian Airlines Boeing 737 Max crashed shortly after takeoff from Addis Ababa on March 10 en route to Nairobi, killing all 157 people on board.

The crash, which followed a similar tragedy in Indonesia, led to the grounding of the plane pending safety reviews by US authorities.

Boeing fired its CEO eight months after the crash.

The Christchurch massacre was one of the deadliest far-right terrorist attacks in modern history.

Protests against a controversial law allowing extradition of suspects to mainland China  brought hundreds of thousands out on to the streets of Hong Kong in March.

The demonstrations, which have since turned violent, continue to this day.

WikiLeaks founder Julian Assange was arrested by British police on April 11 after they were invited into the Ecuadorian embassy where he has been holed up since 2012.

One of the most iconic churches in France, Notre Dame de Paris (Our Lady of Paris),  burned for eight straight hours before a team of 400 French firefighters were able to tame the blaze.

Former Sudanese President Omar al Bashir was ousted by the army on April 11, brought down by a military coup after months of anti-government protests against his iron-fisted rule.

Former Algerian President Abdelaziz Bouteflika, who had been in power for 20 years, resigned on April 2 amid massive street protests.

On May 10, the US President Donald Trump increased tariffs on $200 billion worth of Chinese goods to 25 percent from 10 percent after China pulled back from a proposed deal that US officials said was nearly completed.

US President Donald Trump becomes the first US leader to enter North Korean territory after meeting its leader Kim Jong-un at the Demilitarised Zone separating the North and South Korea. The leaders met at a time of escalating tensions.

Despite the  threats of US sanctions, Russian made S-400 air defence missile systems were delivered to an air base in Ankara on July 15.

By winning the leadership of his Conservative party, the former London mayor and figurehead of the 2016 Brexit campaign formally replaced Theresa May and became new British Prime Minister.

US financier Jeffrey Epstein, a convicted pedophile, was found dead in jail on August 10 from an apparent suicide, triggering outcry over how the high-profile detainee could die in custody.

A suicide bomber killed at least 63 people and wounded 182 in an attack on a wedding reception in the Afghan capital on August 17.

Daesh's affiliate in Afghanistan claimed responsibility for the attack.

A record number of fires ravaged the Amazon drawing international outrage in August.

Saudi Arabia has temporarily halted production at two Aramco oil facilities that were attacked by Yemeni rebels, interrupting about half of the company's total output.

On October 9, Turkey launched Operation Peace Spring to liberate northern Syria from the YPG terrorist group, which is the Syrian branch of the PKK.

The 2019 Nobel Peace was awarded to Ethiopian Prime Minister Abiy Ahmed over his decisive initiative to resolve the border conflict with neighbouring Eritrea.

The leader of the Daesh terror group, Abu Bakr al-Baghdadi, was killed on October 26 after being targeted by a US military raid in Syria's northwestern Idlib province.

Bolivian President Evo Morales announced his resignation on November 10, following three weeks of sometimes-violent protests over his disputed re-election after the army and police withdrew their backing.

More than 500 people were killed in violent clashes between demonstrations and security officers and clashes continue.

The controversial law sparked demonstrations in the country.

Many countries boycotted the Nobel ceremony.

A Democratic-controlled US House of Representatives committee approved charges of abuse of power and obstruction against Republican President Donald Trump on December, making him only the third in history to be impeached. 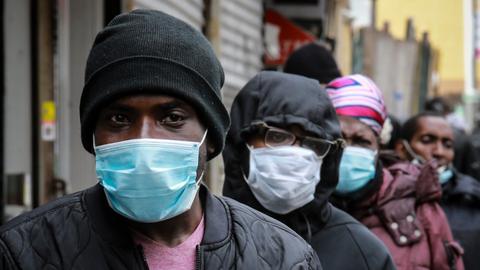