All eyes on Russia ahead of World Cup draw

World Cup holders Germany are in good shape to defend their title after being unbeaten in all games in 2017 and definitely the team to avoid in the draw.

Germany will find out who stands between them and a successful defence of the World Cup as the draw for the 2018 finals in Russia is held in a glitzy ceremony within the Kremlin in Moscow on Friday.

After beating Lionel Messi's Argentina in the final at the Maracana in Rio to lift the World Cup in 2014, the aim for Joachim Loew's side now is to become the first nation since Brazil in 1962 to retain the trophy.

Having already won the Confederations Cup in Russia earlier this year with a fringe squad, the Germans are leading favourites for glory in 2018, a status that Loew himself has said there is no avoiding.

"I don't like how Germany play. They have a structure and a well organised project but they don't have the kind of stars that the other powers do," Argentina coach Jorge Sampaoli said this week.

Certainly, the Germans can expect stiff competition from the Brazil of Neymar - revitalised after their nightmare 7-1 loss to the Germans on home soil - and Spain in particular.

The first step, though, is discovering who they will meet in the group stage as the focus turns to the State Kremlin Palace, where the snow and freezing temperatures of a Russian winter will greet the footballing world for a ceremony starting at 15.00 GMT (6pm local time).

Excitement over the tournament

For all the talk of the controversial awarding of the tournament in the first place, of the friction between Vladimir Putin's Russia and the west, and of fears over hooliganism and potential terror attacks, the draw marks the moment when excitement really starts to build towards the actual competition.

Coaches, players and fans will get an idea of who their teams will face, when and where in this enormous country which will see games staged at venues in 11 different cities, often thousands of kilometres apart, between June 14 and July 15, 2018.

Germany, Brazil and Argentina are all in the first pot along with France, European champions Portugal, Belgium, Poland and the hosts.

But if those nations are certain of avoiding each other, danger lurks in pot two, where the Spanish - rebuilt into a formidable force by Julen Lopetegui, a former Spanish goalkeeper, and the current manager of the Spain national team, after poor showings in 2014 and at Euro 2016 - lie along with England.

"Whatever happens we will accept it gladly and sportingly. I don't waste energy thinking about who I prefer and who I don't," Lopetegui recently said, but Spain and England will surely be crossing their fingers in the hope of being paired with Poland or the Russians.

This will be the penultimate 32-nation tournament before FIFA's grand plan for 48 teams comes into effect for 2026 and world football's governing body will keep apart sides from the same continent with the exception of Europe, which has 14 representatives to go into the eight groups.

As a result, most of the sections will contain two European nations, raising the prospect of England or Spain meeting Germany or France in heavyweight contests right from the start.

Alternatively, there is the possibility of Gareth Southgate's side being drawn with Iceland in a repeat of the Euro 2016 clash in Nice that ended in humiliation for Roy Hodgson's England.

"It will be difficult to repeat the ride of 2016 in France but we don't want to set any limits," said the Iceland coach Heimir Hallgrimsson in an interview with Italy's Gazzetta dello Sport.

Quarter-finalists at the Euros, Iceland join Central American outsiders Panama in making their World Cup debut in Russia. Also eagerly awaiting the draw will be Peru, in the finals for the first time since 1982, and Egypt, back after a 28-year absence.

Those sides will add something new to a tournament that will be deprived, amongst others, of Italy for the first time since 1958, 2014 semi-finalists the Netherlands, and the United States. 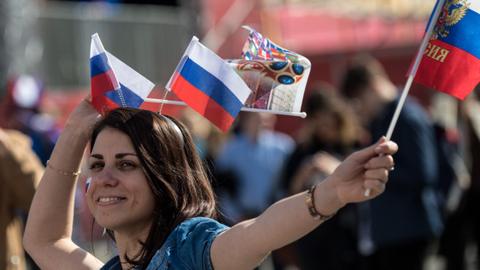