Warne, who is regarded as one of the greatest players in cricket history, died of a suspected heart attack in Thailand.

Warne died in Koh Samui, Thailand, of a suspected heart attack, according to a statement issued by his management company on Friday.

"Shane was found unresponsive in his villa and despite the best efforts of medical staff, he could not be revived," the statement said.

"The family requests privacy at this time and will provide further details in due course."

Police said Warne's body had been transferred to hospital for autopsy and his associates would be questioned by police on Saturday, but added there were no signs of foul play.

"Whenever he came to the wicket, change came over the game of Cricket"

My mind just cannot accept that Shane Warne is no more. Gone too soon.. Thoughts and prayers with his family and friends..RIP Warnie 🙏🏻 pic.twitter.com/YgfvY1WaS0

Named as one of the five Wisden Cricketers of the Century, alongside Donald Bradman, Garfield Sobers, Jack Hobbs and Viv Richards, Warne also took 293 wickets in 194 one-day internationals.

Warne is credited with reviving the art of leg-spin, and helped Australia win the World Cup in 1999. He was part of five Ashes-winning teams.

He also became as well known for a colourful life away from cricket as he was for his exploits on the field.

But on the eve of the 2003 World Cup in South Africa, he failed a drugs test after taking diuretics in a bid to lose weight and was sent home before Australian authorities banned him for a year.

Two legends of our game have left us too soon. I’m lost for words, and this is extremely sad. My thoughts and prayers go out to the Marsh and Warne family. I just can not believe it. #rip, you will both be missed https://t.co/gduLY9bIwg

A true competitor and an icon.

'Shocked to the core'

Warne played in the Indian Premier League and other Twenty20 competitions before retiring from international cricket in 2013, but continued to be involved in the game as a broadcaster.

The cricket world united in grief to pay tributes to Warne.

"Unbelievable. I am shocked to the core. This can't be true... There are no words to describe what I feel right now. A huge loss for cricket," West Indian legend Richards said.

The news comes just hours after the death was announced of fellow Australian great Rod Marsh, one of the game's outstanding wicketkeepers.

Still can not believe that the legendary leg spinner Shane Warne is no more.Feeling sad 😢 what a gem of person and human being he was.I have spend some quality times with him during my international and county stint.🙏 RIP 😢 pic.twitter.com/NABjSNnmuM 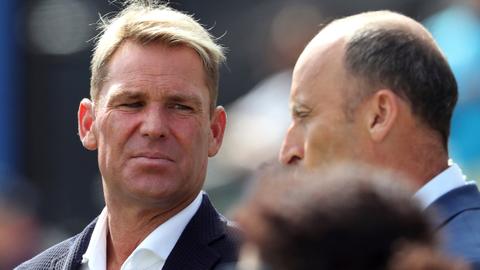