Ethiopian runners vying for a place in the summer Olympics dominated the Boston Marathon on Monday, taking the top three spots in the men's division for the first time, and the top two spots among the women.

Lemi Berhanu Hayle won for the men in a dramatic late surge against defending champ and fellow Ethiopian Lelisa Desisa, covering the notoriously hilly course in two hours, 12 minutes and 45 seconds, as thousands of spectators cheered him.

Hayle said through an interpreter after the race that winning "feels like his birthday."

Ethiopian men have won the Boston marathon six times since 1989, but have never before taken all three spots on the podium. No country has swept the top three spots in the Boston Marathon since Kenya did it in both the men's and women's divisions in 2012, according to marathon officials.

On the women's side, Ethiopian Atsede Baysa won in 2:29:19, overcoming a 37-second deficit in the last five miles (8 km) of the race against training mate Tirfi Tsegaye.

It was the 120th running of the world's oldest continually run annual marathon, and the third since a pair of ethnic Chechen brothers killed three people and injured more than 260 with a bomb attack at the finish line.

Most top US marathoners sat out Boston to train for the Rio Games in August. But Ethiopia and Kenya - whose runners dominated the lead packs - have yet to pick their teams for the Olympics and will consider the Boston results.

The 21-year-old Hayle won the race by pairing off with Desisa to break from the mainly East African pack late in the course. He then drafted off his countryman before surging past him in the final two miles.

Hayle's finish time was slower than the personal best of 2:04:33 he posted in Dubai earlier this year. The Boston marathon record of 2:03:02 was achieved by Kenyan Geoffrey Mutai in 2011.

The top placing American on Monday was Zachary Hine, who took 10th place with a finish of 2:21:37.

Among the women, Baysa, 29, is one of the world's most prolific marathoners and has posted top four finishes in five world marathon majors, including wins in Paris and Chicago.

Kenyan Caroline Rotich, who was defending her 2015 win in Boston and was widely seen as a favorite in Monday's women's race, dropped out early after appearing to hobble around mile four.

The top placing American woman was Neely Spence Gracey, who finished in 9th place in her marathon debut with a time of 2:35:00. She was born 26 years ago on race day as her father, Olympian Steve Spence, ran the course.

"I was told the crowds were pretty spectacular and I was not disappointed," Neely said, adding she achieved her goal of making it into the top 10.

In total, about 30,000 people attempted the world-renowned course, which brings out crowds of spectators holding signs, cheering, drinking beer and barbecuing.

"It's always been a dream of mine to run Boston," said David Harris, 42, of Atlanta, who qualified for the race.

Harris said the 2013 bombings motivated him.

"That whole thing made me want to do this race even more," Harris said, echoing the feeling voiced by many other runners. "As tragic as these things are, it makes us want to come together and show what we can do." 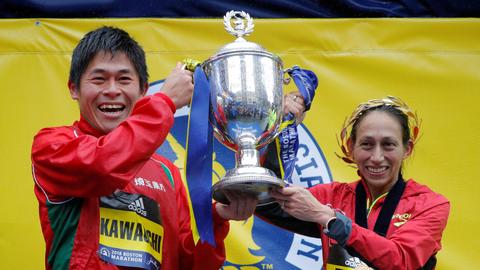