On a day that was perfect for low scoring, Woods let rip with his driver and tucked into the birdie buffet with his red-hot putter, briefly grabbing a share of the lead.

Three-time champion Tiger Woods proved he’s still got what it takes as he rolled back the years on Saturday, roaring into contention at the British Open with a sizzling third-round 66 at Carnoustie.

On a day that was perfect for low scoring, Woods let rip with his driver and tucked into the birdie buffet with his red-hot putter, briefly grabbing a share of the lead — something the American had not done at a major since the 2013 Masters.

His five-under 66 was his lowest British Open round since he romped to victory at Hoylake in 2006 and left him only four shots behind Jordan Spieth, Xander Schauffele and Kevin Kisner.

“That was good. I played well today. I really did. I hit a lot of good shots,” Woods told reporters.

“It would be better on Sunday, but I’m right there. I’ve got a chance at this, which is great. I didn’t know if that would ever happen again, but here I am with a chance in a major. It’s going to be fun.”

Woods has been plagued by knee and back injuries and dealt with personal problems including a marriage breakup since winning the last of his 14 majors a decade ago.

But few golfers have ever captivated a crowd more, and it was like watching a tape of him in his pomp as he pulled the driver out of the bag and went on the attack.

Sensing that something special was brewing, huge crowds swarmed across the Scottish links trying to catch a glimpse of the 42-year-old’s barnstorming charge. Even American playing partner Shaun Norris got swept along by Woods-mania.

“It’s crazy. Absolutely crazy to think so many people can follow a person,” he said. “There’s a couple of holes that people may be standing 15, 20 deep. It’s like playing with a mythical creature. It doesn’t feel real.”

Woods began the day level par after two steady rounds, tied for 29th, but six birdies fired him to a share of sixth place.

The charge began at the fourth where a brilliant wedge shot set up a birdie, and he picked up another shot at the sixth.

When a 25-foot birdie putt trundled across the ninth green and into the cup things to get very interesting.

“You’re the man, Tiger, and everyone knows it,” yelled a fan standing next to another in an orange and black tiger costume.

Feeding off the electrifying atmosphere, Woods sent a laser-guided second shot to the 10th that left him a tap-in birdie, then at the 11th he rolled a 95-foot eagle putt to five feet and tapped home to gain another shot.

It could have been even better. Woods dropped his putter in disbelief when a birdie attempt refused to drop on 13, but he made birdie at the par-five 14th to put his name at the top of the leaderboard — a development that had seasoned golf hacks snapping photos of the huge media scoreboard.

He did not stay there long. At the long par-three 16th his tee-shot just failed to stay on the green and he three-putted.

Woods played his “one bad swing” at the 18th, but lady luck intervened to keep his ball out of Barry Burn and in thick rough that at least gave him a shot.

He laid up, then speared a majestic 150-yard wedge to within three feet. It sounded like a Woods victory march as he strode to the green to complete a memorable round, and who knows what Sunday has in store when the winds are supposed to blow.

“I think he’s got a great chance,” Norris said. “I don’t think he’s very far away from really taking everybody on again.” 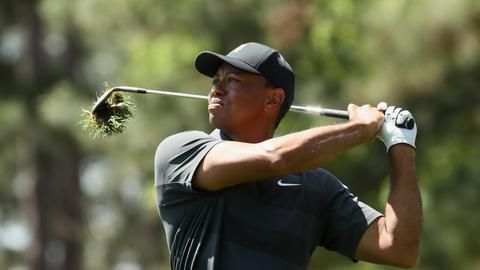 Woods one-over in return as Spieth surges to Masters lead 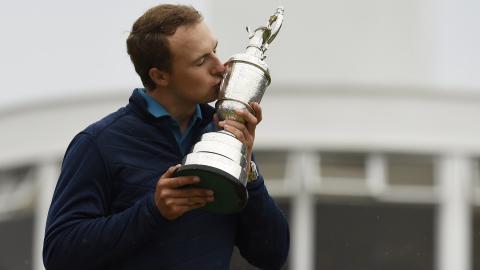