It is essential to combat disinformation, which has become a mass weapon and national security issue, says Turkish Communications Director Altun

Türkiye "effectively" fights against those who try to spread terrorist propaganda in digital environments, Communications Director Fahrettin Altun has said.

"Just as our soldiers destroyed terror nests, the relevant units of our state are waging an effective fight against those who spread terrorism and make propaganda for a terrorist organisation in virtual or digital environments," Altun told a digital media panel in the capital Ankara on Thursday.

He said it is essential to combat disinformation, which itself has become a mass weapon and a national security issue.

"Using disinformation as a tool and turning it into a systematic attack by individuals and groups who consciously and intentionally poison social communication processes is a dirty method of warfare and digital terrorism," he added.

Altun stressed that terrorist groups and their supporters, unable to cope with Turkish security forces on the ground, are embracing disinformation operations aimed at the country's fight against terrorism through social media and publications.

He added that disinformation is spread especially through exploiting digital opportunities and social media.

But he asserted: "We do not and will not allow anyone to deceive and discredit our country and our citizens with fake news.” 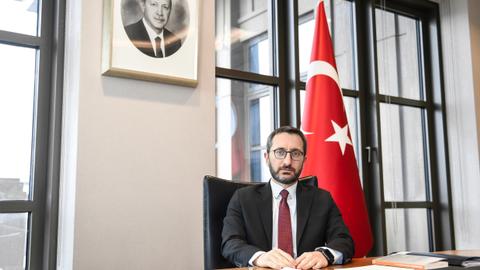