The body of an Anadolu Agency correspondent was located in a stream on Thursday two weeks after he went missing.

Abdulkadir Nisanci was on a mission at Mt. Soganli, located between northeastern Bayburt and Trabzon provinces, when he fell off a cliff on May 10.

Nisanci slipped when a mass of snow he stepped on broke loose.

Search and rescue teams were on the lookout for Nisanci since the incident occurred.

His body was at last found in a stream a kilometre (0.6 miles) away from the cliff he fell off.

Turkish Presidency Communications Director Fahrettin Altun expressed his condolences to the families of Nisanci and the two soldiers who died while searching for the journalist.

"Unfortunately, after 14 days of hopeful searching, we received sad news from Abdulkadir Nisanci. I would like to express my deepest condolences to the families of Abdulkadir Nisanci and our two soldiers, Mustafa Gidergelmez and Eyup Kapalikaya, who reached martyrdom while searching for him," Altun said in a tweet.

"I was saddened to learn that Anadolu Agency correspondent Abdulkadir Nisanci, who had fallen off a cliff at the Mt. Soganli while covering news, has lost his life," Cavusoglu tweeted.

Imamoglu also conveyed his condolences to the families of three martyrs.

Turkish Journalists' Association (TGC) joint the condolences, saying journalism is one of the most difficult professions in the world. 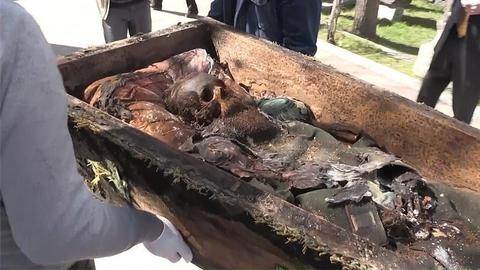