Turkish President Recep Tayyip Erdogan is set to welcome his Cuban counterpart Miguel Diaz-Canel in the capital Ankara. Here's a closer look at the relations between the two countries.

Cuban President Miguel Diaz-Canel is on a three-day visit to Türkiye to hold talks on bilateral relations.

The leaders are expected to discuss steps to enhance bilateral cooperation, as well as exchange views on the regional and global issues, particularly relating to Latin America and the Caribbean region.

70 years on from the establishment of relations between the two countries, here is a look back at Türkiye-Cuba relations:

From Ottoman times to the present

Diplomatic relations between Türkiye and Cuba were established in 1952.

However, the connection between Türkiye and Cuba can be traced back to the Ottoman era, particularly when migrants travelled from the Middle East to Cuba at the end of the 19th century.

The grandchildren of those who had gone there on Ottoman passports are still referred to as “El Turco” in the region.

Türkiye and Cuba were indirectly linked during the Cold War, when tensions between the Soviet Union and the United States nearly spilt over into a nuclear conflict.

In October of 1962, US reconnaissance flights revealed that the Soviets were constructing secret missile bases in Cuba.

After a thirteen-day standoff between the superpowers, which included a US naval blockade of Cuba, the Soviet Union agreed to withdraw its missiles.

In exchange, the US publicly pledged not to invade Cuba and, confidentially, agreed to pull its nuclear missiles out of Türkiye.

Thus, a potential global catastrophe was avoided after the two nuclear states removed their warheads from Cuba and Türkiye.

Türkiye opened its first Embassy in the Caribbean in Havana in 1979.

However, it wasn’t until 2015 when Erdogan visited Havana, in the first-ever presidential visit from Türkiye to Cuba, that a high point was reached in the bilateral relations.

Turkish Airlines then started direct flights to Cuba in 2016.

Cuba's foreign minister Bruno Rodriguez Parrilla visited Türkiye in June 2017, which was the first ministerial visit from Cuba to Türkiye.

Now, for the first time in 27 years, Cuba’s President is embarking on a trip to Ankara, marking another milestone in ties between the two countries.

Energy cooperation will surely be on the agenda.

Amid Cuba's energy crisis, aggravated by Washington's sanctions, Havana has turned to Türkiye for help.

Karpowership, one of the world's largest operators of ship-mounted power plants and part of the Türkiye-based Karadeniz Holding, operates five ships off the Cuban coast, providing the island nation with much-needed electricity.

Ankara has frequently voiced its opposition to all sanctions against Cuba and argues in favour of ending the US imposed embargo on the Latin American nation.

Earlier this month, the UN General Assembly voted overwhelmingly to condemn the US economic embargo of Cuba for the 30th year.

The non-binding resolution was approved by 185 countries and opposed only by the US and Israel, with Brazil and Ukraine abstaining.

Overall, Türkiye and Cuba have a growing bilateral relationship in a variety of fields including agriculture, construction, infrastructure, energy, health and tourism. Bilateral trade between the two countries crossed more than $50 million in 2019. 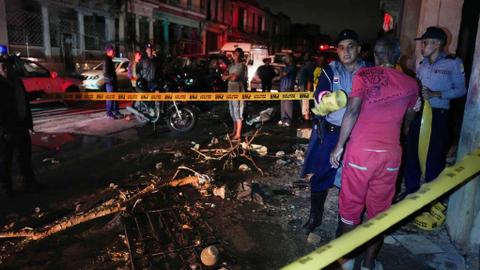