At least 2,745 judges and prosecutors, 2,839 soldiers accused of being involved in failed coup arrested.

Turkish President, Recep Tayyip Erdogan has called on Washington to extradite US-based cleric Fethullah Gulen, whom he accuses of trying to orchestrate a military coup in the country over the last 24 hours.

Saturday's call came only hours after thousands of people took to the streets in opposition to the attempted putsch against the democratically-elected government.

Addressing a crowd of thousands in Istanbul, Erdogan refused to call Gulen, a one-time close associate of the Turkish president's, by name. Instead, he kept referring to Pennsylvania, the US state Gulen has resided in since 1999.

In a statement meant for US President Barack Obama, Erdogan said: "I told you myself, either deport or hand over to us this person who lives in 400 acres of land in Pennsylvania."

"I told you he was engaged in coup plots but I was not listened to. Now again today after the coup I say it again. Deliver this man who lives in Pennsylvania to Turkey," the Turkish president said to his counterpart in the United States.

Earlier in the day, John Kerry, the US Secretary of State, said Washington would need clear evidence linking Gulen to the attempted junta.

"We would invite the government of Turkey, as we always do, to present us with any legitimate evidence that withstands scrutiny. And the United States will accept that and look at it and make judgments about it appropriately."

Gulen's supporters, both inside and outside Turkey, quickly renounced the coup and rejected Erdogan's claims that they played any role in Friday's insurrection.

In a statement, Gulen said he condemned, "in the strongest terms, the attempted military coup in Turkey." He said. "I pray to God for Turkey, for Turkish citizens, and for all those currently in Turkey that this situation is resolved peacefully and quickly."

Along with the request for Gulen's extradition, Ankara has taken a hard line against those they accuse of plotting the coup.

According to government sources, at least 2,839 soldiers accused of being involved in the coup were arrested by late Saturday evening. At least 20 others were killed.

Referring to the soldiers accused of involvement in the coup, Prime Minister Binali Yildirim said: "These traitors don't deserve any rank."

The current government, already known for taking a hard-line on dissent and protest, has also arrested 2,745 judges and prosecutors. The mass detentions come as Yildirim called for those the government accuses of involvement in the coup to be tried for "treason" against the state.

On Friday evening, shortly after segments of the military managed to briefly take control of parts of Istanbul and Ankara, the capital, Erdogan accused Gulen and his supporters of trying to establish a "parallel structure" within the judiciary and the army.

Following the suppression of the insurrection, life in Istanbul, the nation's largest city, slowly began to return to normal. By the late Saturday afternoon public transport resumed operation and businesses slowly began to re-open.

A festive atmosphere at #Taksim as people play music and rejoice the #failedcouphttps://t.co/K9Sx5xKPMG

Still, the bustling streets were largely empty till evening.

By the early evening, thousands of people took to the streets once again at the behest of Erdogan, who in an SMS to the nation called for the people to continue to defend their nation against what he claims was a small group. 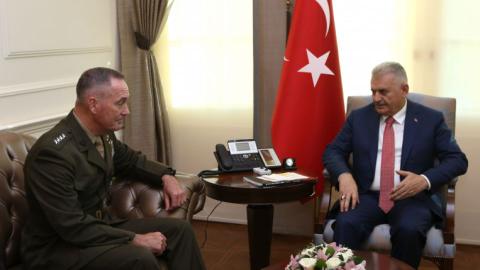 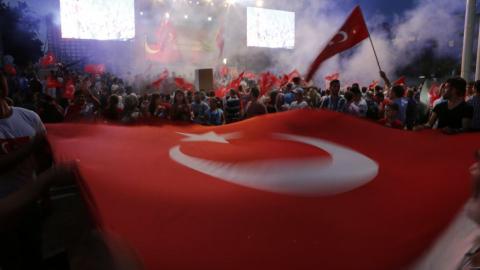 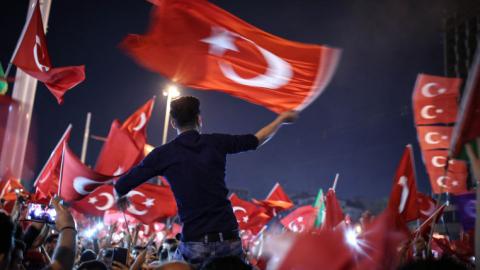 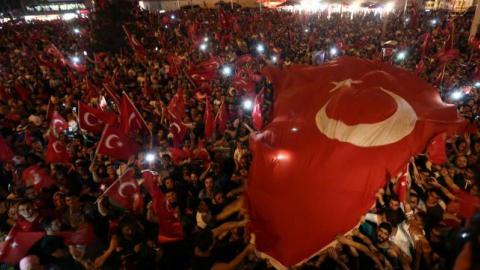