Those who razed Iraq to the ground on the allegation that it possessed chemical weapons ignore crimes involving such weapons in Syria, Turkish President Recep Tayyip Erdogan said on Wednesday.

In a speech broadcasted live, Turkish President Recep Tayyip Erdogan slammed the stance of Western governments on the Syrian conflict in which he said around 500,000 people have been killed by both conventional and chemical weapons.

"500,000 people have been killed in the Syrian conflict by conventional weapons, Assad must be handed over to the International Court of Justice in The Hague," Erdogan said.

He asked what matter is it if the weapons are conventional or chemical when the result is death.

Erdogan once again repeated his famous words "the world is bigger than five," referring to the five permanent members of the UN Security Council which he said does not represent the world.

"It [the Security Council] should represent both continents and religions," said Erdogan.

"There are around 1.7 billion Muslims in the world, but they don't have a representative in the UN Security Council, how fair is this?"

Erdogan said his call for change in the Security Council would mean a change in the status quo in the world and that was why the West has been carrying out a blackmail campaign against him, calling him a "dictator."

"Because of saying this, Erdogan becomes dictator and against freedom," he said.

"I will keep saying it even if some do not."

The conflict between Azerbaijan and Armenia in the Armenian-occupied Azerbaijani region of Karabakh was another topic on Erdogan's agenda in the meeting with neighbourhood leaders (mukhtars).

Erdogan called on Armenia to help Azerbaijan's efforts to end the crisis in the region.

"Regarding the ongoing clashes between Armenia and Azerbaijan, I hope Armenia will respond to Azerbaijan's efforts to stop the armed clashes, but if it doesn't respond - and so far there is no response - this is crime and the fault is Armenia's," Erdogan said.

Responding to Russian accusations that Turkey has sided with Azerbaijan in the conflict, the Turkish president said if any country was taking sides it was Russia.

Tension in the Karabakh region between Azerbaijan and Armenia have been on the rise in recent weeks .

The recent fighting is one of the deadliest outbreaks of violence since the 1994 peace treaty signed between the countries, brought about through Russian mediation.

According to Baku, around 20 Azerbaijanis have died in the latest round of fighting, including four civilians. At least 20 others have been wounded in attacks by Armenian-backed militias. 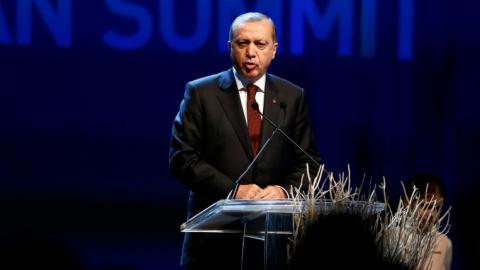