Some allies work hand in hand with terror groups, while lecturing on fight against terror, says Turkey's President Erdogan.

Speaking to reporters about his meetings during Wednesday's NATO leaders' summit in London, Recep Tayyip Erdogan said the main topics were the refugee crisis, the fight against terrorism, burden sharing, cyber and hybrid threats, strengthening solidarity among allies, Russia and China.

Underlining that Turkey was the only NATO member fighting against terror groups such as YPG/PKK in northern Syria, Daesh/ISIS and the Fetullah Terrorist Organisation (FETO), he said, "We regret to see that some allies are hand in hand with these terror groups while emphasising the fight against terrorism."

Erdogan added that NATO leaders only talked about the fight against terrorism, without taking action on the matter.

Erdogan stressed that Turkey stood as one of the strongest members of NATO and has participated in the most critical missions of the alliance since becoming a member in 1952.

Noting that Turkey was currently present in various NATO's missions varying from Afghanistan to Iraq, Erdogan said Turkey's military and financial share in the pact was more than that of many other members.

Erdogan went on to say that the alliance's power depended on the solidarity between members, adding the insecurity of one member would mean insecurity for the others.

He said he told his counterparts that Turkey had no intention of leaving the region without first securing its peace.

Erdogan said he criticised his counterparts who boasted about eradicating the threat from Daesh in alliance with the YPG/PKK terrorists, while Daesh was still present in the area.

He went on to say that Turkey inflicted significant blows to Daesh, with over 3,000 of its members neutralised in Al Bab, northern Syria, along with many others in other parts of the country. He added that Turkey has arrested over 7,000 Daesh terrorists.

Noting that though some NATO members praised Ankara for hosting up to four million Syrians, the EU had not yet fulfilled its promise to provide a total of over $6.6 billion (€6 billion) of financial support for Turkey.

When asked about French President Emmanuel Macron's attitude during the meeting, Erdogan said he had no quarrel with his counterpart.

Macron had recently said the NATO Alliance had become "braindead" in an interview with The Economist.

Stressing that agreements between Turkey and France have been stalling due to differences of opinion, he said, "They [France] need us, and we need them."

When asked about how NATO would respond if Turkey called on the pact to take action against the YPG/PKK terror group, Erdogan said it would be "unfair" to make assumptions based on possibilities.

He underlined that both the YPG/PKK and Syrian regime had carried out attacks in northern Syria on civilians.

"Of course, we warn about these [attacks]. As you know, both we and Russia have reciprocal commissions. They are in constant contact," Erdogan said, underscoring that Turkey immediately responds by cautioning the other side when tensions rise in the opposition-held Idlib province in northwestern Syria, but that Russia did not tend to do so.

Noting that Russian President Vladimir Putin would visit Istanbul on Jan 8 for the opening ceremony of the TurkStream gas pipeline, Erdogan said Turkey might not wait for this to act in northern Syria against terror attacks.

Without identifying which, Erdogan said either the UK, France or Germany expressed willingness to help rebuild Syria after the war — one of the core objectives of Turkey's anti-terror operation in Syria.

Erdogan said he had "fruitful" talks with Spanish Prime Minister Pedro Sanchez as well as US President Donald Trump on the sidelines of the NATO meeting.

"We discussed some problematic issues, again ... We are going to focus on [the goal of reaching] $100 billion bilateral trade volume. Also, we discussed the NATO meeting and regional issues. Our friends assigned on the issues of the S-400 and F-35 will continue their efforts," Erdogan said, referring to his meeting with Trump.

He went on to say that a recent summit between himself and the leaders of France, the UK and Germany had decided to hold annual four-way meetings starting February 2020.

On a recent maritime deal with Libya, Erdogan said the agreement would be implemented so long as Libya's UN-recognised Government of National Accord (GNA) stood firm and strong.

He added that Turkey's memorandum of understanding with Libya was hammered out with a legitimate government, and that parliament was preparing to ratify this deal.

“However, the opposing side is disturbed [with agreement]," he said, adding that Greece, the Greek Cypriot administration, Egypt and Israel incited the EU against over this matter.

He criticised France for attempting to get involved in the Cyprus issue, saying Turkey, Greece and the UK were guarantor countries and that France had no right to intervene.

“We are going to do our best to protect their [Turkish Cypriots'] rights," he said, emphasising that Ankara would never renounce its stance on the island.

The recent agreement with Libya fully "complies with" the International Law of the Sea, Erdogan said. 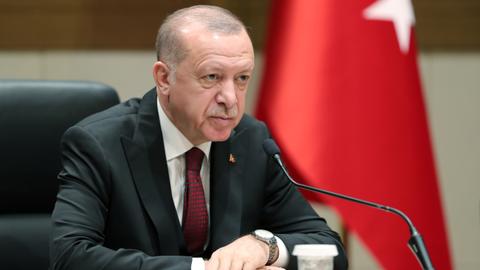