Crews are making intensive efforts to control forest fire in Marmaris district of Mugla province through land and air operations.

Firefighters and other personnel have been intervening by land and air to control a wildfire that broke out overnight in a forest in southern Türkiye, an official has said.

The flames spread in a short time due to winds on Wednesday as the cause of the fire in Marmaris district of Mugla province is still unknown.

Mugla Governor Orhan Tavli said helicopters affiliated with the Mugla Regional Directorate of Forestry are taking part in the operation along with forest workers, and sprinklers and construction equipment are also being utilised.

Crews are making intensive efforts to control the blaze, which is growing rapidly with the effects of the winds.

Türkiye's Communications Director Fahrettin Altun said that all institutions are involved in efforts to extinguish wildfires in the region and an investigation is under way to find out the cause of fires.

Minister of Agriculture and Forestry Vahit Kirisci said 20 helicopters, 14 planes, 1494 personnel, 363 public vehicles and 39 construction equipments are employed to fight against the wildfires.

Kirisci and Interior Minister Suleyman Soylu made aerial inspections of the fire-hit area.

"It's not a fire that should worry us much, given the current circumstances. But the position we are in right now is of course a bit critical," Kirisci said after the inspections.

He said that with daybreak, the intervention will continue with 20 helicopters and 14 planes. 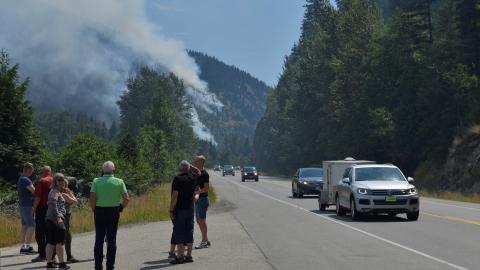