Meanwhile, Germany urges countries in the eastern Mediterranean to make a fair agreement that involves all parties, to resolve tensions in the region.

Greece’s parliament has announced a one-day delay in the debate and voting on the country's controversial maritime deals with Egypt and Italy.

The 300-seat Hellenic Parliament said in a statement that, as a precaution against coronavirus, the voting will be held on Thursday in batches.

The Turkish Foreign Ministry has asserted that Greece and Egypt share no sea borders and that the deal is "null and void."

It added that the demarcated area in the pact is located on Turkey's continental shelf, as Ankara has pronounced to the UN.

Germany's defence minister urged for countries in the eastern Mediterranean to make a fair agreement that involves all parties, to resolve tensions in the region.

"It means much more than tensions between neighboring countries, it has an influence on our cooperation," Annegret Kramp-Karrenbauer told reporters after an EU defence ministers meeting in Berlin.

According to Kramp-Karrenbauer, the bloc needs "to work as fast as possible to relax the tensions and transform them into negotiations."

European diplomacy aims at reaching "a fair agreement with all the parties involved" which implies a "difficult and complicated process," she added.

Kramp-Karrenbauer also said she had agreed with her counterparts from Greece and the Greek Cypriot Administration that fears of unintentional escalation needed to be defused first in order to start political negotiations.

EU foreign ministers will also discuss the issue on Thursday and Friday, along with the situations in Belarus, Libya, the bloc's strategy towards Russia, and the geopolitical implications of the novel coronavirus pandemic.

Greece has contested Turkey's current energy exploration in the Eastern Mediterranean, trying to box in Turkish maritime territory based on small islands near the Turkish coast.

Turkey – the country with the longest coastline on the Mediterranean – has sent out drill ships to explore for energy on its continental shelf, saying that both Turkey and the Turkish Republic of Northern Cyprus (TRNC) have rights in the region.

Dialogue for fairly sharing these resources will be a win-win for all sides, said Turkish officials.

During a meeting on Tuesday with German Foreign Minister Heiko Maas seeking to meditate the Mediterranean dispute, Turkish Foreign Minister Mevlut Cavusoglu expressed a willingness to engage in dialogue but also objected to Greek neglect of international law and rising tensions in the region.

Turkish President Recep Tayyip Erdogan said that Turkey will make "no concessions" in the eastern Mediterranean, warning Greece to avoid taking steps that could lead to its "ruin."

Turkey will take whatever is rightfully its own in the Mediterranean, as well as the Aegean and the Black Sea.

Speaking at an event commemorating the 11th-century military victory by Seljuk Turks over the Byzantine empire at Malazgirt or Manzikert, Erdogan also called on Ankara's counterparts to avoid mistakes that he said would bring their destruction.

His remarks came as Greece announced plans to extend its territorial waters along its western coastline with Italy and said it would launch military exercises on Wednesday with France, Italy and Cyprus in the eastern Mediterranean.

"Just as we have no eyes over anyone’s territory, sovereignty, and interests, we will never compromise on what belongs to us. We are determined to do whatever is necessary in political, economic, and military terms," Erdogan said.

"We invite our interlocutors to get their act together and to avoid mistakes that will lead to their ruin,” he said.

The Turkish president on late Wednesday held a telephonic conversation with his US counterpart Donald Trump and discussed issues related to bilateral ties as well as developments in the region and the Eastern Mediterranean.

During the phone call Erdogan told Trump that Turkey has proved itself by taking concrete steps in favour of dialogue and to deescalate tensions in the Eastern Mediterranean.

Turkey has long opposed efforts of various countries to exclude it from its rightful maritime jurisdiction.

The efforts have especially tried to deprive Turkey of its rights to explore energy resources in the region, which Turkey has encouraged the fair sharing of by regional countries.

EastMed forum initiated in January 2019 by Israel, Greece, Greek Cypriot Administration, Egypt, Jordan, Italy and Palestine for distribution Eastern Mediterranean gas to the markets which Ankara says it is unrealistic without including Turkey and Turkish Cypriots.

US President Donald Trump earlier also spoke to Greek Prime Minister Kyriakos Mitsotakis. The US President expressed concern over increased tension between the two NATO allies in the eastern Mediterranean and reaffirmed that Greece and Turkey must commit to dialogue to resolve their differences.

President Trump reaffirmed that Greece and Turkey must commit to dialogue, which is the only path to resolving their differences. The two leaders also discussed important bilateral and regional issues.

In the future, Greece could also extend its territorial waters in other maritime areas, he added.

In the mid-1990s, Greece had similarly attempted to extend its territorial waters in the Aegean Sea to 12 miles, but scuttled the plan after Turkey declared such a move would be a cause for war.

Mitsotakis made the comments during a phone call with US President Donald Trump, as the row between the two neighbours over gas and maritime borders ratcheted up another notch.

Greece and its EU allies are holding war games in the Mediterranean as Turkey conducts drills with the US navy nearby.

The NATO chief on Wednesday called for dialogue to ease tensions in the eastern Mediterranean.

“Turkey and Greece have both been important NATO allies for many years. We need to find a way to resolve the situation in the Eastern Mediterranean based on the spirit of allied solidarity,” Jens Stoltenberg said ahead of the EU defence ministers’ informal meeting in Berlin.

France conducted a military drill along with GCA, United Arab Emirates and Greece in Eastern Mediterranean which Paris landed its war planes in GCA.

Ankara accused Paris of "violating 1960 Agreements" that it is banned of landing different national warplanes. Turkey is one of the guarantor country's along with Greece and UK.

"With this attitude, France, which is not the guarantor of the Cyprus Island, dangerously encourages the Greek and GCA to escalate the tensions further, who are responsible for the current tensions in the Eastern Mediterranean," statement said. 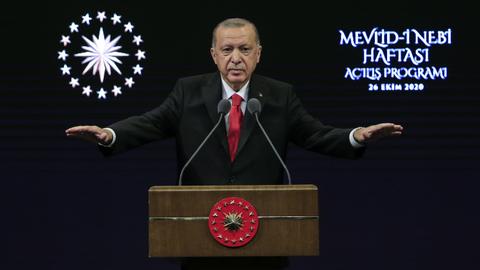 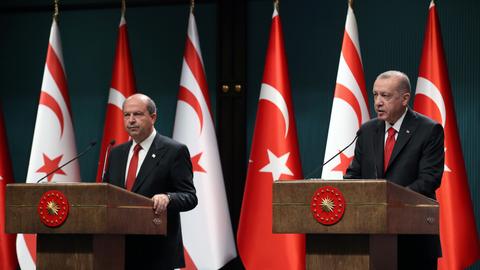 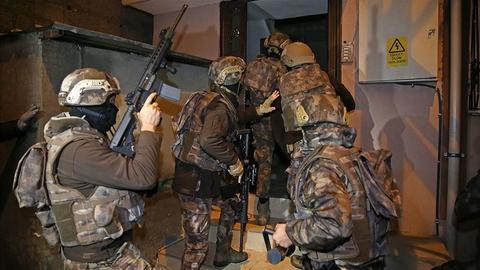