Turkish security sources tell TRT World that footage was taken out of the country on a private jet and a 15-member 'hit squad' was seen going to the Saudi Consul General's residence.

A fifteen-member Saudi ‘hit squad’ is being blamed for the disappearance of Saudi dissident journalist Jamal Khashoggi, according to Turkish security sources familiar with the case, who asked not to be named.

The security sources told TRT World that the "hit squad" took the CCTV footage from the Saudi consulate in Istanbul when they left Turkey.

The allegation that Khashoggi was killed in the consulate has been rejected by Saudi Arabia, which claims the dissident journalist left the premises alive.

Photos of the 15 men checking in to hotels in Turkey’s largest city Istanbul surfaced early Wednesday morning on local Turkish media, more than a week after Jamal Khashoggi went missing inside the Saudi consulate in Istanbul.

A Twitter thread claims to have matched several identities of the "hit squad" released by Turkish media with men in Saudi Arabia who are allegedly either part of Saudi Arabia’s security forces or government employees.

TRT World can only independently verify one of these claims as being accurate, according to a Turkish security source. The source confirms that Salah Muhammed al Tubaigy heads a forensic evidence unit in Saudi Arabia’s General Security Directorate.

Whether this refers to the General Directorate for Investigation, part of the new Saudi state security departments created last year, is still unclear.

A screenshot of Khashoggi entering the consulate – taken by a Turkish police camera at 1:14 pm on October 2 – is the last known image of the journalist who was living in exile between Washington DC and Istanbul.

Anonymous Turkish sources say the 15 men flew into Istanbul in two private Gulfstream IV jets with tail numbers HZ-SK1 and HZ-SK2. Sources say the men stayed at the mission hours before and after Khashoggi entered the consulate, then moving on to the residence of the Saudi consul general a few hundred metres from the consulate itself.

The men are said to have then left for the private jet enclosure in Istanbul’s Ataturk Airport. After a brief search, Turkish security officials, showing CCTV footage, say the two planes carrying the 15 Saudis departed Istanbul.

Public access flight trackers show one of the planes heading to Dubai on its way to Riyadh. The other to Cairo, also with the Saudi capital as its final destination.

Events leading to the disappearance

Beyond that, conjecture and anonymous security sources paint a picture of possible abduction and even murder, with the Saudi consulate in Istanbul at the centre of a mystery that has captured global media’s attention.

Jamal Khashoggi was once considered an insider to the Saudi establishment, with links to the security and intelligence apparatus.

But he left Saudi Arabia in 2017, fearing censorship and possible detention at the hands of the Crown Prince Mohammad bin Salman. He went into self-imposed exile in Washington DC, while also maintaining a base in Turkey.

Even in exile, he refused to outright condemn the Saudi regime, especially on alleged war crimes in Yemen and the crackdown on dissent in Saudi Arabia.

In an off-the-record interview published by the BBC, Khashoggi said he didn’t think he’d be able to go back to Saudi Arabia, but still called Mohammad bin Salman’s reforms a time of "great transformation" in his country.

In Istanbul, Khashoggi met his fiancee, Hatice Cengiz, a PhD student who had met Khashoggi at a seminar. The two soon agreed to marry. In order to do so, he needed to finalise his divorce with his first wife in Saudi Arabia. He first approached the Saudi consulate in Istanbul on September 28 to secure those documents but was told to come back a week later.

Then on October 2, as he was about to enter the Saudi Consulate for the second time, Khashoggi left his cellphones with his fiancee, instructing her to inform Yasin Aktay if anything went wrong. Hatice Cengiz did so hours after Khashoggi didn’t come out and after consular staff informed her that he had left.

The disappearance of Jamal Khashoggi casts another shadow over the already strained ties between Turkey and Saudi Arabia. In 2017, the relationship hit what was then considered rock-bottom after Saudi Arabia imposed an economic blockade on neighbouring Qatar, over the latter's alleged support of terrorism in the Middle East.

Ankara backed Doha in denying the charges, instead accusing Saudi Arabia and its allies of using the pretext of terrorism allegations to suppress dissent at home.

Riyadh and Ankara have also differed on the subject of the Muslim Brotherhood in Egypt and on the Israeli-Palestinian conflict, which Saudi Arabia has unofficially backed the so-called US “deal of the century,” whereas Turkey has condemned the Trump administration’s attempt to “force a deal on the Palestinians." 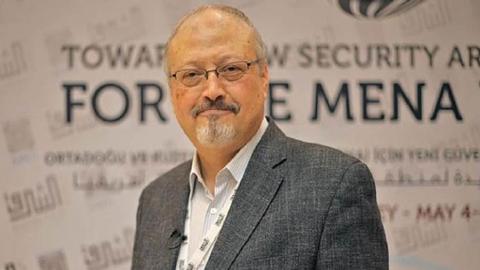