In photos: Türkiye commemorates 100th anniversary of the Great Victory

Turks gathered to mark 100 years since the victory of the Battle of Dumlupinar, which liberated the country from the occupation of the allied forces at the conclusion of World War I.

Türkiye has marked the 100th anniversary of its Victory Day, which commemorates the resounding defeat of the occupying Greek army at the hands of Turks in the Battle of Dumlupinar in 1922.

On Tuesday, Turks across the country celebrated the Great Offensive — one of the greatest military victories in history.

The Great Offensive was launched by the Turkish Armed Forces on August 26, 1922 under the leadership of Mustafa Kemal Ataturk, the founder of modern Türkiye, and ended on September 18 that year.

The victors of World War I, also known as the Entente Powers, landed in present-day Türkiye in 1919, occupying large swathes of land based on the provisions of the Armistice of Mudros.

As British, French, Italian and Greek warships anchored in the Turkish Straits, French troops took over the region around Adana in southern Türkiye.

British soldiers entered Urfa and Maras further east as well as Samsun and Merzifon in Black Sea region. The Italians occupied large strips of the Mediterranean coastline including Antalya and other southwestern Anatolian cities.

On May 15, 1919, the Greek army landed in Izmir with the permission of the Entente Powers, triggering what would become a full-fledged uprising and campaign against the rule of occupying forces in the country.

Forming the National Forces (Kuvayi Milliye) as a means of armed resistance against the invaders, Turks knew that there were only two possible choices — either surrender to the occupation forces or fight against them.

The Turkish Grand National Assembly was launched in Ankara in 1920 and the Turkish Army moved to the western front. The following year, Turkish soldiers would repel Greek forces that advanced within 70 kilometres of the parliament.

After roughly one year of preparation, Commander-in-Chief Ataturk launched the Great Offensive on August 26, 1922 to expel the enemy.

At dawn, the offensive began with artillery fire and Turkish soldiers pushing forward seized Tinaztepe, Belentepe and Kalecik Sivrisi near the town of Afyonkarahisar, which the Turkish army would seize on August 27.

On the night of August 29, the commanders made a situation assessment and agreed to act immediately and conclude the attack in a short time.

Ataturk ordered the Turkish army to move on to western Kutahya on August 30 in a decisive blow to the Greek troops in Anatolia.

Following the victory, Ataturk, Cakmak and Inonu set to sweep the remaining Greek soldiers out of Anatolia in an offensive on the city of Izmir on the Aegean coast.

"Armies, your first goal is the Mediterranean. Forward!" Ataturk ordered the army, which would move out from western Kutahya on September 1.

The Turkish Army liberated Afyonkarahisar from the Greek army on August 27, Kutahya on August 30 and Izmir on September 9.

Addressing the audience, he said: "The Turkish nation has once again engraved this truth in the bosom of history with a steel pen with the victory it has won, the power it showed and its will.” 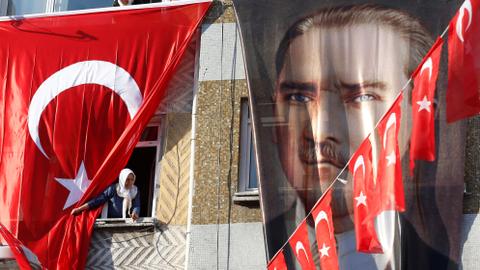