Istanbul's Istiklal Avenue has been reopened to pedestrian traffic after Sunday's explosion that killed six people and injured 81.

Benches were removed from the street, which is now being patrolled by police.

The suspect who left the bomb on the crowded street frequented by shoppers and tourists has been arrested, Interior Minister Suleyman Soylu said on Monday.

"Our assessment is that the order for the deadly terror attack came from Ayn al Arab in northern Syria, where the PKK/PYD has its Syrian headquarters," he added.

He reiterated that Türkiye will continue with its resolute and rightful war on terror.

“We will retaliate against those who are responsible for this heinous terror attack,” he added.

Those countries who are behind terror attacks "must immediately" cease their support if they want Türkiye’s friendship, he said.

PYD and YPG are the political and armed wings of the PKK in Syria. The PKK is recognised as a terrorist organisation by Türkiye, the US and EU.

Turkish Health Minister Fahrettin Koca later said 39 out of 81 people who were wounded during the attack were discharged from the hospital.

“Five of the 42 wounded are in the intensive care unit, two of them in critical condition,” Koca said.

Four females, including a nine-year-old girl, and two men, were killed in the blast.

'Findings show PKK/PYD behind the attack'

Based on initial information from Istanbul Governor Ali Yerlikaya, President Recep Tayyip Erdogan said earlier that the explosion could be an act of terrorism.

"It would be wrong to say this is undoubtedly a terrorist attack, but the initial developments and initial intelligence from my governor is that it smells of terrorism," Erdogan said.

Giving further details on the attack, Justice Minister Bekir Bozdag said a woman sat on one of the benches on the street for more than 40 minutes, and the explosion occurred just minutes after she got up.

"There are two possibilities. Either there is a self-exploding mechanism in the bag or someone detonated it (with remote control)," Bozdag said.

- 6 people dead, 53 others injured
- Wishing Allah’s mercy on those who lost their lives
- Türkiye not to bow down to terrorism
- All the perpetrators to be identified pic.twitter.com/r75oGEgfev

"All institutions and organisations of our state are conducting a fast, meticulous and effective investigation regarding the incident," Altun said.

In addition, a broadcast ban was issued by the Istanbul Criminal Court of Peace for all visual and audio news and social networking sites related to the explosion.

"We invite media organisations to be responsible, not to rely on misleading content sourced from social media, and to take the statements of relevant public authorities as a basis," Altun added. 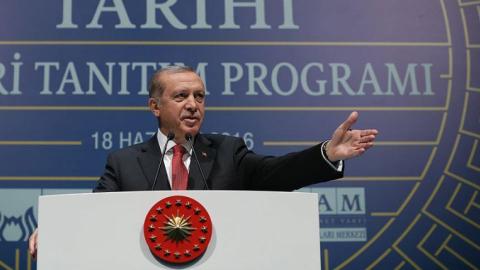