1
Turkish FM lauds world's 'better support' for safe return of refugees
2
A 111-year-old tradition in Turkey's Thrace: Pavli Fair
3
Barbaros: Another Turkish series to take the world by storm?
4
Turkey calls for immediate restoration of constitution in Guinea
5
In new book, Erdogan says the UN needs to be reformed for global justice

Saudi Arabia's Consulate in Istanbul said that a missing Saudi journalist who was there to obtain documents had left the building but Turkish officials say they believe the writer is still inside.

Mystery surrounded the whereabouts of a prominent Saudi critic on Thursday after Riyadh announced he had left their consulate in Istanbul -- but Turkey and his fiancee said he had not been heard from since entering the building.

Jamal Khashoggi, a contributor to the Washington Post, went to the Saudi consulate on Tuesday to receive an official document for his marriage.

His fiancee reported him missing after the journalist, who has lived in self-imposed exile in the US since last year to avoid possible arrest, was not seen to emerge.

The former government adviser, has been critical of some policies of Saudi Crown Prince Mohammed bin Salman and Riyadh's intervention in the war in Yemen.

After an initial period of silence Saudi Arabia said the consulate was working with Turkish authorities "to uncover the circumstances of the disappearance of Jamal Khashoggi after he left the consulate building" in a statement published on Thursday by the state-run SPA news agency.

A senior Turkish official however said on Wednesday the journalist was being held at the consulate.

"According to information we have, this individual who is a Saudi national is still at the Istanbul consulate of Saudi Arabia," presidential spokesman Ibrahim Kalin told reporters in Ankara.

He said the Turkish foreign ministry and police were closely monitoring the case, adding that Ankara was in touch with Saudi officials.

Khashoggi's Turkish fiancee has been waiting outside the consulate since Wednesday morning.

"I haven't received any news from him since 1 pm (1000 GMT) on Tuesday," 36-year-old Hatice, who would not give her family name, said as she stood near barricades.

She said Khashoggi had left his mobile phone with her.

"We want to know his whereabouts. Where is Jamal?" she said. "We want him to come out of the consulate safe and sound."

The US State Department said it was investigating the matter.

"We... are very concerned about where he may be," the Washington Post's international opinions editor, Eli Lopez, said in a statement late on Tuesday.

"It would be unfair and outrageous if he has been detained for his work as a journalist and commentator," Lopez said.

Turan Kislakci, a friend of Khashoggi and head of the Turkish-Arab Media Association, said: "We are certain that Jamal is being held inside unless the consulate has a tunnel."

Hatice said Khashoggi had gone to the consulate to obtain documents for their own marriage to prove he was not married.

Reporters Without Borders said Khashoggi's disappearance was "extremely worrying," calling on Saudi and Turkish authorities "to do everything to ensure that this journalist reappears – free –- as soon as possible."

The Committee to Protect Journalists said the Saudi's disappearance was a cause for alarm "given the Saudi authorities' pattern of quietly detaining critical journalists".

In an article written for the Post in September 2017, Khashoggi wrote: "When I speak of the fear, intimidation, arrests and public shaming of intellectuals and religious leaders who dare to speak their minds, and then I tell you that I'm from Saudi Arabia, are you surprised?"

At about the same time, Khashoggi said he had been banned from contributing to the Al Hayat daily, owned by Saudi Prince Khaled bin Sultan al Saud.

The writer admitted to defending the Muslim Brotherhood, which did not appear to please the newspaper.

While Riyadh classifies the Brotherhood as a "terrorist organisation", Turkey is one of the group's main supporters.

The hashtag "#kidnappingofJamalKhashoggi" was one of the most shared in Arabic on Twitter since Tuesday evening.

Saudi Arabia, which ranks 169th out of 180 on the World Press Freedom Index issued by Reporters Without Borders (RSF), has launched a modernisation campaign since the 2017 appointment of Prince Mohammed as heir to the throne.

But the ultra-conservative kingdom, which won plaudits in June for lifting a ban on women driving, has drawn heavy criticism for its handling of dissent.

Khashoggi once said that before he left the kingdom, the Saudi government banned him from Twitter for warning "against an overly enthusiastic embrace of then-president-elect Donald Trump".

He is one of the rare Saudi journalists to condemn repression in the country. In one of his last tweets, he criticised the lawsuit filed against a Saudi economist, Essam al Zamel, after his arrest by Saudi authorities. 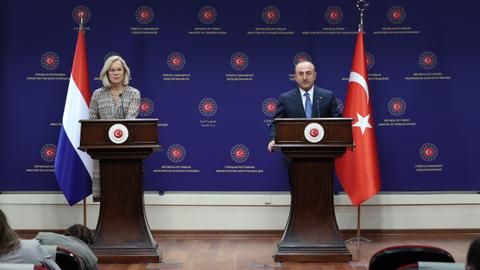 1
Turkish FM lauds world's 'better support' for safe return of refugees
2
A 111-year-old tradition in Turkey's Thrace: Pavli Fair
3
Barbaros: Another Turkish series to take the world by storm?
4
Turkey calls for immediate restoration of constitution in Guinea
5
In new book, Erdogan says the UN needs to be reformed for global justice