Young people must be put at the heart of development and innovation and given the opportunities and tools needed to take their countries into the future, says the Islamic Cooperation Youth Forum's new President Taha Ayhan.

This is all while addressing difficulties faced by young people, such as lack of opportunities, poor education, radicalism, bad governance and the like.

This year ICYF commemorated OIC Youth Day, falling on September 3 every year. The event which was held in Istanbul brought together a wide range of policymakers and ministers of youth from a number of countries.

But it wasn’t all formality and celebration. The event held high-level panels under the theme ‘Cooperation and Solidarity’, with representatives from several youth organisations, ministries, and the OIC, to take stock of the state of youth throughout the Muslim World.

Notable attendees included Mehmet Muharrem Kasapoglu and Azad Rahimov, Ministers of Youth and Sports of Turkey and Azerbaijan, respectively. Youssef Himmat, President of the Forum for European Muslim and Student Organisations was also in attendance.

In his opening speech, the President of the Islamic Cooperation Youth Forum, Taha Ayhan, emphasised the significant energy and human capital to be found throughout the OIC member states.

“Of nearly 1.75 billion youth throughout the world, over 500 million are in OIC Member States. The Muslim world is rich in the energy and potential of our youth,” he said.

“Today's youth represent not only the majority of our societies but also the main driver of development and nation-building processes.”

He continued: “To realise a better future for our youth, we must fix issues of economic opportunity, support family institutions, and develop strong narratives to convince youth and policymakers of the importance and need youth involvement in decision-making.

“We must also continue to study and share our best practices from different OIC member states.”

In a statement from the Secretary General of the OIC Yousef bin Ahmed al Othaimeen, he emphasised: “A life lived in peace is not a luxury or a dream but a necessary reality and inalienable right to development.”

Youth are our Future

By leveraging the strategic human capital that youth represent, building up their skills, and empowering them to make a difference, the 57 member states of the OIC -the second largest intergovernmental organisation in the world after the United Nations- wants to make things happen on a large scale.

The rationale behind the strategy is straightforward. Nearly one-third of the world’s 1.8 billion young people live in OIC member countries that continue to enjoy high fertility rates, meaning that the ‘youth bulge’ as it’s come to be called, won’t go away anytime soon. Compared to developed countries, which struggle with low youth to elderly rations, and an ‘elderly bulge’ that comes with high social security costs; it’s an opportunity.

For policymakers at the ICYF, young people can be engines of innovation, creativity, and energy; representing the most effective way to sustainably develop countries, if countries make the most of them.

At the heart of it all is Ayan, the unanimously elected, third president of the ICYF.

With his strong background in law as a practicing lawyer, and as the founding president of the Liberty and Justice association, he brings needed expertise to a demanding position in need of transformational strategy, managing global youth programmes, high-level diplomacy with OIC’s member countries, and a keen understanding of youth policy and change.

His commitment to enhancing the state of young people throughout the OIC and beyond, is based on a key premise.

“Youth should not be considered a challenge to be managed, but vital human capital in need of care and investment. Only by developing their knowledge, skills, and competencies can youth become active, meaningful participants in our societies,” he writes in a foreword.

The name of the game is capacity development. By using the OIC’s existing framework, the ICYF is ideally positioned to enhance government policies towards youth across 57 countries. This takes the form of high-level consultations, sharing best practices, producing reports, and ultimately implementing the OIC’s first youth strategy and joint youth plan of action, which was adopted recently by its many member states.

The strategy in itself is a bold undertaking. The visionary document outlines priorities and areas of needed growth in youth related fields, including education, employment, social inclusion, entrepreneurship, public health, engagement, extremism, migration and the environment. It only came about after years of research and consultation to ensure all countries would be on board with implementation.

Mandated with implementing the youth strategy throughout the OIC’s 57 member states, Ayan is using every tool and mechanism at ICYF’s disposal, including the OIC Startup incubator; an online platform that develops young entrepreneurs before matching them with keen investors.

The scope of ICYF’s projects is nothing less than significant. Its annual film, writing, and photography competitions alone take place worldwide; drawing global attention to key issues including migrants, development and the environment.

For the policymakers at ICYF, it’s not only a matter of achieving change, but of giving youth a platform to make change for themselves. Left unsaid throughout this all is the belief that key challenges such as the education-skill mismatch, underdevelopment, lack of opportunity, violence and low technological innovation can’t be solved with traditional top-down approaches.

Engaging empowered youth, however, and two-way feedback loops between good governance and dynamic youth capital, can make a major difference. 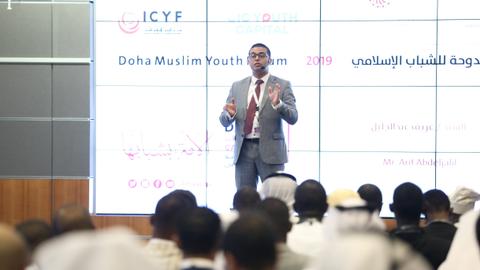