The deal began on Wednesday, October 23 0900GMT and elements of the deal are expected to be finalised in 150 hours. It involves the Russian military police and Syrian border guards entering the Syrian side of the Turkish-Syrian border outside the area of Operation Peace Spring in order to help facilitate the withdrawal of YPG/PKK terrorists and their weapons in Syria within a 30 km distance of the border.

"All YPG elements and their weapons will be removed from Manbij and Tal Rifat [northern Syrian district]," according to the deal.

The deal also foresees the return of Syrian refugees in Turkey to their homeland in a “safe and voluntary” manner.

The YPG is the Syrian branch of the PKK which has run a terror campaign against the Turkish state since the 1980s and it is considered as a terror organisation by Ankara, Washington and EU bloc.

Turkey’s Minister of Foreign Affairs Mevlut Cavusoglu outlined the points of the memorandum between Ankara and Moscow on Twitter.

Later that day, US President Donald Trump tweeted: “Good news seems to be happening with respect to Turkey, Syria and the Middle East. Further reports to come later!”

Turkey’s Operation Peace Spring began on October 9 to root out PKK/YPG terrorists in northern Syria and to safely resettle Syrian refugees in Turkey back in the region. Turkey foresaw a safe zone of 30 km stretching from the Turkish-Syrian border reaching the M4 motorway that runs parallel to the border inside Syria.

The US agreed to pull its troops out of northern Syria in advance of the Turkish incursion despite having armed YPG/PKK militants in the past in their fight against Daesh.

Trump tweeted: “The stupid endless wars, for us, are ending!”

He also noted that American troops should never have been in the Middle East.

While Trump was responding positively to the Turkish operation into Syria, he didn’t refrain from making threats, telling Turkey that he would “destroy” its economy as he’s “done before” if Turkey “does anything that I, in my great and unmatched wisdom, consider to be off limits”.

Capture of key towns in Syria

Turkey and the Turkish-backed Syrian National Army (SNA) also took over Ras al Ayn, across from Turkey’s Ceylanpinar, on October 12.

Tal Abyad is 100 kilometres from Ras al Ayn in northeastern Syria, near the border with Turkey.

Also last week, YPG militants, under pressure by the gains of the Turkish security forces and their allies in Syria, sought help from Syrian regime leader Bashar al Assad.

The YPG, having lost the support of American soldiers who have pulled out of the area, was struggling to hold its territory in northern Syria because of Turkey’s Operation Peace Spring.

Details of the deal between the YPG-led Syrian Democratic Forces (SDF, another name for the group) that have been leaked suggest that the SDF has invited regime forces to take over towns that once were under their control near the Turkey-Syria border.

They were leaving Ras al Ayn for Qamishli district of Hasakah city, in line with Turkey’s agreement with the US that was made on October 17.

Ankara’s pause on Operation Peace Spring has allowed YPG/PKK terrorists to flee the 32 km zone Turkey wants to clear. The pause for the counter-terrorism operation was established to allow YPG/PKK militants to leave the area.

On early Wednesday, October 23, the Turkish Defence Ministry announced that the US had announced to Turkey that the withdrawal of YPG/PKK militants from the safe zone Ankara demands in northern Syria was complete.

The Turkish Defence Ministry’s statement added there was no need to initiate a new operation outside the current area of operation at this stage.

What is the safe zone that Turkey proposes?

Turkey has been calling for the creation of a safe zone for four years. This designated area north of the M4 motorway could offer shelter for one to two million people, a portion of the 3.6 million Syrian refugees currently hosted in Turkey.

Turkey’s President Erdogan, speaking at the UN General Assembly last month, suggested that many Syrians from Turkey and other countries could be settled in the safe zone in Syria. 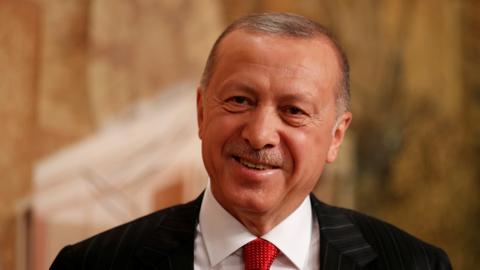