Policeman stabbed to death by Daesh suspect in Istanbul

The attacker, who was reportedly preparing to carry out a suicide bomb attack, was shot dead after killing the policeman.

A police officer was killed in Istanbul late on Sunday after being stabbed by a Daesh suspect, according to police sources.

The sources said Istanbul anti-terror police arrested the suspect during an operation against Daesh earlier in the day. The suspect was allegedly in preparation of a suicide bomb attack.

The suspect was later taken to the Istanbul Police Headquarters where he attacked one police officer with a knife inside the detention room.

The injured police officer succumbed to his wounds at the hospital.

Turkey, which has been hit by a series of deadly attacks carried out by the Daesh terror group, has stepped up its anti-terrorism operations across the country as of late.

About 750 people with alleged Daesh links were detained in a major police sweep earlier this year after the group claimed responsibility for a mass shooting at an Istanbul nightclub on New Year's Eve that killed 39 people. 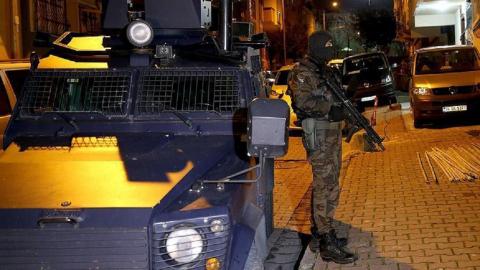