Erdogan said that Turkey has suffered a lot from terrorism and has considerable experience fighting it.

“For this reason, we are showing great effort to mobilise the world in fight against terrorism and radicalisation, which is an inseparable part of terrorism.”

Calling out double-standards in the fight against terror and rising extremist movements, Erdogan noted that the PKK/YPG terror group was being tolerated and even “supported” all over Europe.

“Tens of thousands of truckloads of arms, vehicles and equipment are provided to terror groups in northern Syria for free and we are fighting against them now,” he said.

In its more than 30-year terror campaign against Turkey, the PKK has been responsible for the deaths of nearly 40,000 people, including many women and children. The YPG/PKK is its Syrian branch.

Erdogan said that Ankara would soon clear Syria’s borders with Turkey of terrorists, allowing around 4 million Syrians to return home.

He also highlighted the rise in anti-Islam incidents and recalled that Turkey called on the UN and other international and regional organisations to declare March 15 as ‘International Day of Solidarity against Islamophobia’.

On March 15, at least 50 Muslims were killed and as many injured when a terrorist entered the Al Noor and Linwood mosques in Christchurch and shot worshippers in cold blood, including four children younger than 18.

Touching on Israeli atrocities on Palestine, he urged all countries to be more sensitive about Palestine and Jerusalem, and also to take effective measures.

He also said that to cover its murders in Gaza, Israel does not hesitate to bomb media outlets, including Turkey’s, as last week it targeted a building where Anadolu Agency’s office is also located.

Erdogan also said that for stability in the eastern Mediterranean the rights and interests of Turkey and Turkish Cypriots must be protected.

“Stability in Cyprus and the Eastern Mediterranean is only possible by looking after the rights and interests of Turkey and the Turkish Republic of Northern Cyprus.”

Erdogan reiterated that Ankara would not tolerate a fait accompli in the region, and all related parties are aware of the fact.

“Like all problems, we want to solve this issue with reciprocal talks, dialogue and cooperation,” he added.

It has seen an on-and-off peace process in recent years, including the collapse of a 2017 initiative in Switzerland under the auspices of guarantor countries Turkey, Greece and the U.K.

Turkey has consistently contested the Greek Cypriot administration’s unilateral drilling in the Eastern Mediterranean, saying Turkish Cypriots also have rights to the resources in the area. 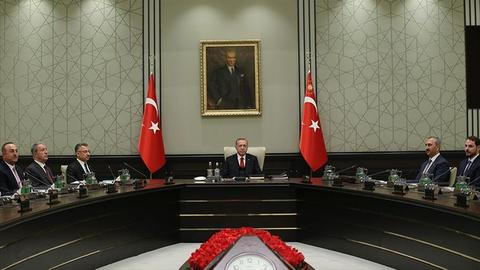