Turkey has been facing a dilemma along its Syria border since the emergence of DAESH and YPG in northern Syria. Both are recognised as terrorist groups by Ankara have fiercely fought each other to claim Syria's border with Turkey.

November 2013: The PYD announced three autonomous areas or "cantons" called Afrin, Jazira and Kobane (from west to the east) following the withdrawal of Syrian regime forces.

January 2015: YPG completely retook Kobane from DAESH after a bloody fight for four consecutive months. Iraqi Kurdish Peshmerga forces from northern Iraq were given passage through Turkey to help push back DAESH.

June 15, 2015: The YPG took over the Arab-dominated border town of Tel Abyad, which allowed the group to join its Jazira "canton" with Kobane.

June 29, 2015: Turkey declared any incursion west of the Euphrates River by the YPG as a red line at a National Security Council (MGK) meeting.

July 20, 2015: A DAESH suicide bombing in Turkey's southeastern province of Sanliurfa killed over 30 people on their way to deliver aid to Kobane.

October 13, 2015: A twin suicide bombing by DAESH in the Turkish capital Ankara kills over 100 people.

November 24, 2015: Turkey downed a Russian jet over its border with Syria since it had violated Turkish air space.

August 12, 2016: The US-backed Syria Democratic Forces alliance (SDF), which is mainly comprised of the YPG, captured the city of Manbij, just south of Jarablus, from DAESH. 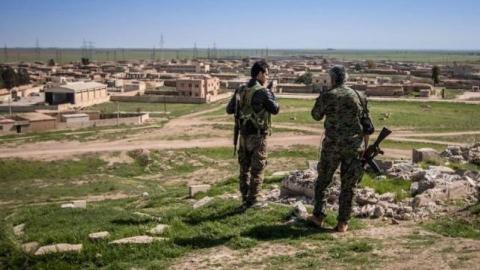