TRT World went online in August 2015 and has since grown into a network publishing breaking and in-depth news reports from around the globe.

Its diverse staff has grown to number over 600 men and women representing 36 nationalities in four broadcasting centres in London, Singapore, Washington, and its headquarters in Istanbul. It is a branch of the Turkish Radio Television Corporation, Turkey's publicly-funded broadcaster, which was founded in 1964.

"TRT World's mission is admirable in a time where international media are basically identical. The presenters and channels may be different, but editing and language are monotonous and interchangeable. I find TRT World's mission to retell stories in a new language, to offer the microphone to those who aren't allowed to speak, to turn the camera on voices which aren't seen," Erdogan said.

"TRT World will not be the official bulletin of the state," Erdogan said. "That's not what we want — on the contrary, we want this channel to set a high standard in newsmaking and tell the world about our country, our people."

Noting the channel has garnered a global audience covering major news stories from Syria to Libya to the United States, Deputy Prime Minister Numan Kurtulmus said, "TRT World's competition is not other TRT channels or other channels in Turkey — its competitors are channels that broadcast in English and are significant players in the world scene. We came to a significant point in a year, but in coming years we will be one of the most successful media organisations in the world."

"Rather than promoting Turkey, we aim to show the audience how we interpret the current affairs," Eren said. 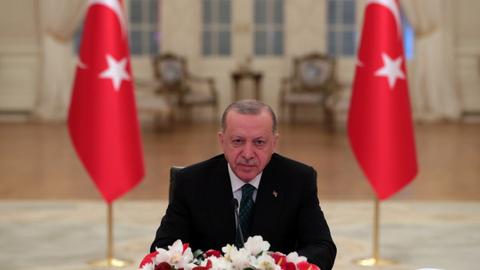 Erdogan: Turkey will continue to defend truth about 1915 events