Turkish security forces have been engaged in a long-running campaign to thwart the Daesh threat.

According to data compiled by Anadolu Agency, 122 suspects including so-called decision makers of the terrorist group were taken in custody in July, with 42 of them remanded in custody.

In a counterterror raid in the central Anatolian province of Kayseri, nine people suspected of involvement with terrorist activities for Daesh in Syria and Iraq were arrested.

In a separate operation in Kayseri, a total of 10 suspects were arrested and four of them remanded in custody.

In an operation in the southern Adana province, six suspects, including a so-called decision-maker, were arrested.

Separately, a total of 17 suspects were arrested and 12 of them, including a so-called decision-maker, were remanded in custody.

In the southern Osmaniye province, four of five suspects were remanded in custody over their links to the terror groups.

Separately, seven suspects were remanded in custody in the southeastern provinces of Batman and Diyarbakir, eastern Erzurum, and Istanbul.

Nine suspects, including three women, were arrested and six of them remanded in custody during counterterror operations in the capital Ankara, the central provinces of Corum and Kirikkale, the Mediterranean province of Mersin, and the Black Sea province of Kocaeli.

A total of 42 suspects, including a number of foreign nationals, were remanded in custody in operations in Istanbul, the Black Sea province of Samsun, and eastern Malatya, southern Osmaniye, and northwestern Tekirdag provinces.

Also, a fugitive Iraqi national suspected of links to terror groups was arrested in the northwestern Balikesir province.

Two female terrorists wanted under red notices were remanded in custody in the Akcakale district near the Turkish-Syrian border.

The terrorists were captured while trying to illegally enter Turkey with nine children.

They claimed that their husbands were killed in Syria and they were preparing to go to Russia.

In 2018, some 268,000 irregular migrants were held in Turkey, according to the Interior Ministry.

This year so far, at least 165,000 irregular migrants have been held across Turkey, according to Suleyman Soylu, the interior minister.

Turkey has been a key transit point for irregular migrants aiming to cross into Europe to start new lives, especially those fleeing war and persecution.

More than 300 people have been killed in Daesh-claimed attacks in Turkey, where the terrorist group has targeted civilians in suicide bombings, rocket, and gun attacks. 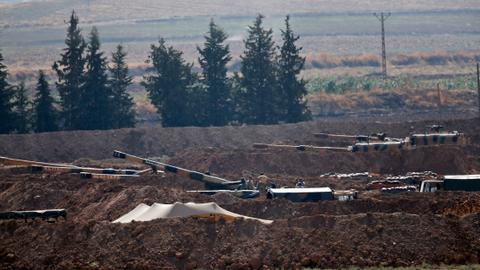