“Our aid is not limited to borders,” he said at the TRT World Forum in Istanbul on Wednesday.

“Turkey will be present on the ground [in Somalia] with institutions to bring aid and assistance,” he said.

In his keynote address on the opening day of the two-day event, Turkey's prime minister also took to task European nations for rising xenophobia and intolerance.

At least 300 people were killed and hundreds of others were wounded by two bombs that detonated in the Somali capital.

Forty Somalis, including three children, who were injured in the assault were taken to the Turkish capital Ankara for treatment.

Yildirim noted that his counterpart, Somali Prime Minister Hassan Ali Khayre who was scheduled to speak at the forum, had to postpone his visit to contend with the attacks.

Prime Minister Yildirim also condemned the rise of transnational extremism. “We see it in Europe – anti-immigrant sentiment; attacks and radicalisation. We must have inclusive policies."

“We’re seeing the rise of radicalisation and xenophobia — especially in developed countries. Moreover, radicalisation is mainly rising in Europe, which claims to have internalised democracy,” Yildirim said.

“Radicalism based on violence should not be tolerated.”

A new era in public broadcasting

Speaking about the role of TRT World, Yildirim urged forum attendees to “remember the date of December 7, 2010. In Tunisia, we witnessed a young boy who self-immolated. And that gave way to a hugely turbulent political period. This was followed in Egypt, Jordan, and Yemen. In some countries, leaders had to be changed. Against this turbulent backdrop, media needed to speak the language of the people and also of the region’s geography.”

“We have answered this need by setting up TRT World," the prime minister said.

The forum, organised by Turkey’s public broadcaster TRT World, is taking place at the Conrad Istanbul Bosphorus Hotel between October 18-19 in Istanbul, Turkey.

TRT World's Director General Ibrahim Eren described the TRT World Forum as "the Davos of politics and media," and emphasised its aim of “contributing to Turkey’s mission to produce resolutions for global problems."

The forum's theme is "Inspiring Change in an Age of Uncertainty".

Planned sessions focus on Syria, terrorism, the Qatar crisis, Turkey’s foreign and domestic policies, emerging threats in the Middle East, the rise of the far-right, xenophobia, Islamophobia and digital influencers.

Over 400 politicians, scholars, business leaders, journalists, NGO representatives and other members of civil society indicated they would attend the inaugural forum. 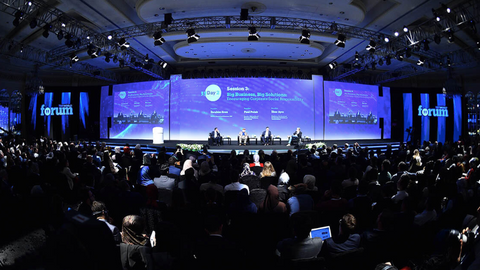