Turkiye’s presidential spokesperson Ibrahim Kalin has said Ankara is willing to contribute to the elimination of differences between Russia and Ukraine.

Kalin’s remarks came on Tuesday at an online webinar titled ‘Russia-Ukraine Tension: What is at Stake for Europe and NATO?’ organised by the Circle Foundation.

Kalin said Russia-Ukraine tensions have been mounting and Turkiye follows these developments “with a lot of concern… because there's a lot at stake here.”

“But first of all, let me just state very clearly that we do not want to see any kind of military action, confrontation or war in Ukraine or between Russia and Ukraine,” he said.

Pointing out that Turkiye fully supports the territorial integrity, political sovereignty and social cohesion of Ukraine, Kalin said “we are telling both sides, both Ukrainians and the Russians, to use restraint, to refrain from any kind of military engagement.”

He underlined that the dialogue between the West and Russia should have started a long time ago but the Russia-NATO Council meetings were disrupted with the illegal annexation of Crimea.

He reminded that Ukrainians “have paid a price… by losing Crimea, (through) the illegal annexation of Crimea, which we all have denounced and not accepted.”

Kalin said “it's really rather counterproductive that this dialogue between Russia and the Western alliance is taking place under the pressure of the Ukrainian issue right now.”

“There are no quick fixes for these kind of large, long-term geopolitical issues, because… yes, it is about Ukraine. But in another sense, it's something… much larger, much, much bigger at stake here,” he added.

“In fact, he even invited both of them to come to Turkiye, if they want to have a meeting there, sort out their issues and differences,” Kalin said.

“In fact, in the next couple of weeks, President Erdogan will be travelling to Ukraine to hold talks with President Zelenskyy there, but also we will remain in close contact with the Russians to avoid any kind of military action, whose consequences of course will be great and irreversible," the Turkish official added.

Russia in 2014 annexed the Crimean Peninsula after the ouster of Ukraine’s Moscow-friendly leader and also threw its weight behind a separatist uprising in eastern Ukraine.

According to the UN, fighting between Ukrainian government forces and pro-Russian separatists in Ukraine’s eastern Donbas region has seen more than 13,000 people killed since 2014. 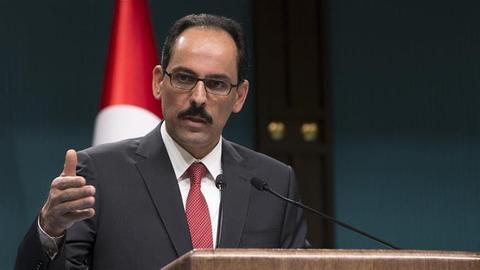