The attack on Turkish soldiers marks the country's first reported casualties since a ceasefire began earlier this month.

Two Turkish soldiers were killed and another injured in a rocket attack by radical groups in Idlib's de-confliction zone in northwestern Syria, the Turkish Defence Ministry said on Thursday.

“As a result of the rocket attack, two of our heroic fellow soldiers were martyred and one other fellow soldier injured,” the ministry statement said.

Targets determined in the region immediately were taken under fire and retaliated in proportion, the statement added.

Meanwhile, in a Twitter post, Turkish Defence Minister Hulusi Akar extended his condolences to the families of the soldiers and the Turkish nation.

The Turkish and Russian presidents on March 5 agreed on a new ceasefire for Idlib.

A ceasefire between opposition-backer Turkey and Syrian regime-ally Russia was agreed to on March 5 in Idlib — the last Syrian outpost out of the control of regime leader Bashar al Assad's forces — and entered into force on March 6 since when it has largely held.

Under the deal, all military activities are to end in Idlib with the establishment of a security corridor six km (3.7 miles) to the north and south of the key M4 highway.

Ankara hopes the ceasefire will stem a months-long Russian- backed regime assault on the region, which is home to some three million people.

Turkish soldiers have been in the region to sustain the ceasefire and ensure the security of civilians.

Nearly a million in Idlib were forced to flee towards the Turkish border during a regime-led offensive underway since December, which killed around 500 civilians. 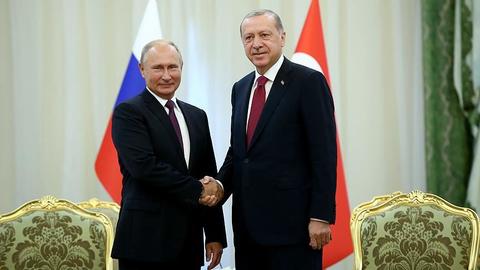