Sources in Syria say US continuing to arm YPG, militant wing of PYD, with weapons brought by US helicopters to Rmeilan airfield in Syria's northern Hasaka Province

The US administration has continued to supply the YPG, the militant wing of the PYD, with military supplies that were recently brought by US helicopters to the strategic Rmeilan airfield, located in Syria's northern Hasaka Province, according to local sources.

Local sources indicated on Friday that US Army helicopters landed in the US-controlled Rmeilan airfield to unload a large military shipment which was transferred to YPG units, according to Turkey's Anadolu Agency.

The US Ambassador to Turkey, John Bass, said on Thursday that the United States is not providing the YPG with weapons or ammunition.

Ankara has consistently protested the US backing of the PYD, which is considered by Turkey to be the Syrian extension of the PKK and a terrorist group.

Turkey has long been confronted with armed attacks in its eastern and southeastern regions by the PKK, which is listed as a terrorist organisation by Turkey, the US, the EU, and NATO.

Currently the country is facing fierce clashes with the PKK terrorist organisation in several districts of the southeastern region, which borders Syria and PYD-controlled territory along the border.

However, the US administration regards the PYD as an ally in the fight against the DAESH terrorist organisation. Recently this has led to growing tensions between Ankara and Washington over its policy in northern Syria and differences have not yet been resolved between the allies though the countries have had a number of discussions on the issue.

The expansion of the PYD in northern Syria has been supported by US-led air strikes until now. The Pentagon confirmed last October that its cargo planes dropped "small arms ammunition" for the Syrian Democratic Forces (SDF), which is a newly-formed militant coalition led mainly by the YPG.

The US envoy to the coalition against DAESH, Brett McGurk, visited PYD-controlled territory in late January in northern Syria in what appeared to be the first open trip to Syrian territory by an Obama administration official in three years.

A PYD representative said at the time that McGurk landed at the Rmeilan airfield and that it was being used by US military helicopters for logistics and deliveries. At the time the airfield was under construction, added the source, and supplies were brought in "according to need."

The Britain-based Syrian Observatory for Human Rights announced in January that the Rmeilan airfield had been expanded and was "nearly ready" for use by US planes.

The Pentagon denied reports in early March that the United States is building air bases in northern Syria within the context of the fight against the DAESH terror organisation. 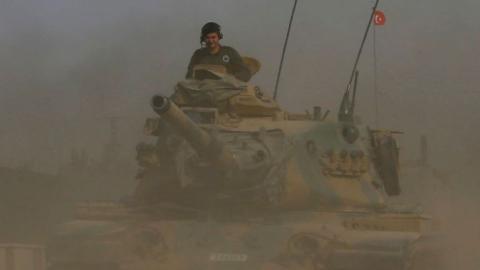