Libyans say rebuilding of the country will take months

As Libya's UN-backed government gains more and more ground from warlord Khalifa Haftar's militias, the residents say it will take months to rebuild the country because of the widespread damage caused by Hafta’s militias.

The Turkish news agency documented the damage in Ain Zara in southern Tripoli, where families found homes looted by militias that seized control.

Abdel-Rahman Mohammad, a resident of Ain Zara, told Anadolu Agency that when he returned home he found it ransacked with furniture stolen.

He said he witnessed al-Kani gangs, militia fighting for Haftar, execute a man who was working with him in his shop after the victim was kidnapped.

Jum'a Turban said he is happy to return to Ain Zara but repairs to his two-story house will take three to four months.

The government launched Operation Peace Storm in March to counter attacks on the capital and recently retook strategic locations, including southern Tripoli areas, the Al-Watiya airbase, Tarhuna and other towns in western Libya.

It recently said 500,000 Libyans have been displaced and 120,000 houses were damaged as a result of Haftar's militia aggression against Tripoli.

The Libyan Center for Mine Clearance and War Remnants said on June 16 that landmines planted by militias killed 39 civilians and injured at least 100 others, including women and children.

The internationally recognized government has been under attack by Haftar's forces since April 2019, with more than 1,000 killed in the violence.

A statement by the Italian Prime Ministry said the two leaders stressed a belief that a permanent solution in Libya could not be based on military plans.

The ministry also said a joint commitment to start the political process to stabilize Libya was reaffirmed.

Meanwhile, a statement from the Libyan Prime Ministry Press Office said the two leaders stressed stability in Libya will be achieved through a political process in line with decisions by the UN Security Council and the Berlin Conference.

The two nations decided to establish a committee to monitor Italian companies' activities in Libya and agreed to sustain Italy's support for mine destruction in Libya, it said.

Libya has been torn by a civil war since the ouster of late ruler Muammar Gaddafi in 2011.

The new government was founded in 2015 under a UN-led agreement, but efforts for a long-term political settlement failed due to a military offensive by Haftar's forces.

The UN recognises the Libyan government headed by al-Sarraj as the country's legitimate authority as Tripoli battles Haftar's militias. 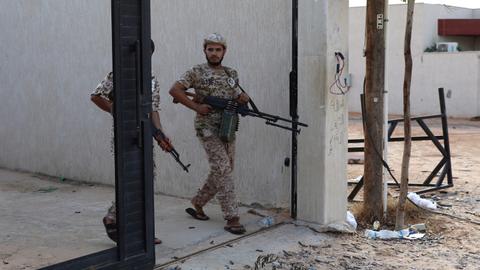