The United States renews calls for a political solution in Libya as it slaps sanctions over smuggling out of the war-torn nation.

The United States has imposed sanctions on three individuals and a Malta-based company, accusing them of acting as a network of smugglers and contributing to instability in Libya.

The US Treasury Department in a statement said it blacklisted Faysal al Wadi, accusing the Libyan national of having smuggled drugs and Libyan fuel into Malta.

The Treasury said that "competition for control of smuggling routes, oil facilities, and transport nodes is a key driver of conflict in Libya and deprives the Libyan people of economic resources."

Thursday's action freezes any US assets of those blacklisted and generally bars Americans from dealing with them.

"The United States is committed to exposing illicit networks exploiting Libya’s resources for their own profit while hurting the Libyan people," he added.

Today, the U.S. imposed financial sanctions on a network of smugglers contributing to instability in Libya and depriving the Libyan people of economic resources. We will continue to take concrete actions in response to those who undermine Libya’s peace, security, or stability.

The United States renewed calls for a political solution in Libya.

Secretary of State Mike Pompeo raised the crisis in a call with Foreign Minister Sameh Shoukry of Egypt, a top backer of Libyan warlord Khalifa Haftar.

Pompeo and Shoukry discussed the "importance of supporting a UN-brokered ceasefire in Libya through political and economic talks," the State Department said.

Spoke today with Egyptian Foreign Minister Shoukry about our shared interests in regional peace and stability. We discussed developments in Libya and our desire to see stability and prosperity there. A lasting @UN-brokered ceasefire and de-escalation are critical to that vision.

Cavusoglu said a ceasefire should see the Government of National Accord exerting control of areas held by warlord Haftar, who has suffered losses but still controls eastern Libya.

Libya descended into chaos after the NATO-backed overthrow of leader Muammar Gaddafi in 2011.

Since 2014, it has been split, with an internationally recognised government controlling the capital, Tripoli, and the northwest, while Haftar in Benghazi rules the east.

Haftar's violent bid to seize Tripoli has been backed by US allies Saudi Arabia, Egypt and the United Arab Emirates as well as Russian mercenaries.

The White House on Tuesday called for a solution that includes a withdrawal of all foreign military personnel. 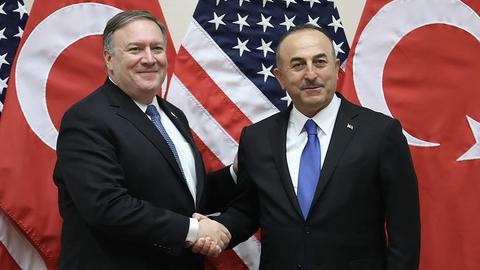 Pompeo hopeful diplomatic row with Turkey will be resolved soon