Protests continue in several cities against the rape and killing of a minor girl, with local media reporting the possibility of a serial killer behind a series of cases against minors since last year.

Protests continued on Thursday against the rape and killing of an underage girl in several cities in Pakistan as local media reported the possibility of a serial killer behind a chain of cases involving the rape and killings of minors since last year.

An eight-year-old girl identified only as Zainab went missing six days ago in the northeastern Kasur city of Punjab province.

Her body was found in a garbage dump on Tuesday night.

Her death kicked off a social media campaign where citizens expressed outrage over government apathy towards repeated cases of child abuse in the country.

Shocked, Disgusted and feeling sick to the core! What a shameful day for us, Zainab's killers must not only be hanged, they should be given such exemplary punishment that people should remember the lessson for ever. Pakistan rulers we're waiting for action!

Zainab was the eighth minor to have been raped and murdered in Kasur in the past year, the police official said, adding that investigators could not confirm if they had a serial killer on their hands.

On January 4, the victim's family had registered a complaint with the local police stating, the child had gone missing. The family alleges police did not co-operate with them.

An initial postmortem report confirms she had been raped, police said.

On Thursday, English-language Dawn newspaper, said the minor had died of strangulation, quoting a doctor.

Zainab's killing, which has drawn wide public outcry, prompted dozens of civil society activists to rally on Thursday in the city of Lahore.

A similar rally took place on Wednesday in the port city of Karachi.

Pakistan's Malala Yousafzai, the 2014 Nobel Peace Prize laureate and champion for female education, tweeted on Wednesday that she was "heartbroken" about Zainab's tragic fate and demanded action against the killer.

Punjab Chief Minister Shehbaz Sharif visited the victim's family on Thursday morning, assuring them the culprits will be caught and punished.

Heartbroken to hear about Zainab - a 7 year old child abused and brutally killed in Kasur, Pakistan. This has to stop. Gov and the concerned authorities must take action. #JusticeForZainab

As authorities grapple to solve the murder mystery, Geo TV reported the recovery of a sixth-grader's body from a field in Kasur on Thursday.

Serial killer on the loose?

According to investigators, a serial killer has been behind all the cases of rape and murder of minors since 2015, Dawn reported on Thursday.

In 2015, the city made headlines after a paedophile ring was cracked.

The ring is alleged to have abducted and sexually abused at least 280 children over several years.

Many of the victims who spoke to the media were adult men – who had kept the abuse hidden for years.

In March 2000, Javed Iqbal was found guilty and sentenced to death for murdering and mutilating 100 runaway children and dissolving their bodies in acid. 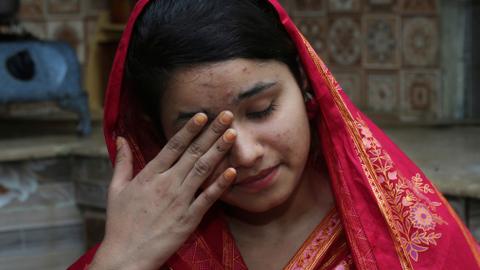