US wants to revive stalled peace talks before May 1, when the last 2,500 US troops must leave Afghanistan under a February 2020 deal struck between the Taliban and the former Trump administration.

An ambitious peace plan for Afghanistan drafted by the US aims for the current government to be replaced with an interim unity set-up until a new constitution is agreed and elections are held, with a little something for everyone promised in the working document circulated in Kabul.

The warring parties have long harbored deep objections to key ideas in the proposal, however.

Under the interim government, the national parliament could either be expanded to include Taliban members or suspended until after the election, the plan suggests. It also says that Afghanistan could "not host terrorists or permit terrorist-related activity on its soil" that threatens other countries, and that the Taliban would have to abandon safe havens and military ties "in neighbouring countries".

The plan has been reported by TOLO News and other Afghan outlets.

State Department spokesman Ned Price told reporters on Monday: "Every idea we have put on the table, every proposal that is out there ... we understand that this process, at its core, must be Afghan-led and Afghan-owned."

The new US administration of President Joe Biden wants to revive stalled peace talks before May 1, when the last 2,500 US troops must leave Afghanistan under a February 2020 deal struck between the Taliban and the former Trump administration.

Secretary of State Antony Blinken last week proposed in a letter to Afghan leaders that Turkey hold a senior-level meeting "in the coming weeks to finalize a peace agreement".

Ghani has refused to step aside for a transitional government. The senior presidential palace official in Kabul echoed that on Monday: "We will never accept an interim set-up through a conference or a political deal."

The Taliban have rejected a ceasefire and elections. But a Taliban leader said that while the insurgents would not join an interim government, they were not opposed to one being formed.

The US draft calls for the establishment of a transitional government, including an "executive administration" chosen by the sides, "with special consideration for the meaningful inclusion of women and members of all ethnic groups."

The interim administration – under a president chosen by both sides – would run the country until elections could be held under a constitution drafted by a commission selected by both sides and the president.

A nationwide ceasefire would be monitored by a joint commission, with each side selecting four members and a ninth named by the interim president.

Three international observers would work with the commission, the draft says.

Laurel Miller, a former acting US special representative for Afghanistan and Pakistan, said the most "contentious" aspect of the US plan is how power would be apportioned within the transitional government.

Miller, who now works with the International Crisis Group, a conflict resolution organisation, added that Taliban leaders "haven't even revealed their starting positions in any substance, much less contemplated something like this".

The United Nation's envoy for Afghanistan is due to arrive in Qatar to meet with Afghan government and Taliban representatives this week in a fresh push on the fractious Afghan peace process, two sources familiar with the talks said.

UN Secretary-General’s Special Representative for Afghanistan Deborah Lyons was also expected to with meet US special envoy for Afghanistan Zalmay Khalilzad and Qatari officials during the visit, the sources said.

These are crucial meetings as the outcome will decide the fate of year-long talks in Doha whether they should be continued or put under a moratorium, one of the sources said.

The US special envoy for Afghanistan and the commander of NATO forces there earlier met Pakistan's army chief on Monday to discuss the Afghan peace process at a pivotal juncture for the stalled negotiations.

Pakistan is the third country that US Special Envoy Zalmay Khalilzad has visited in the last week as Washington looks to inject new life into Afghan peacemaking with a US troop withdrawal deadline looming in May.

READ MORE: US wastes billions on reconstruction and vehicles in Afghanistan

Khalilzad and General Scott Miller, the head of US forces and the NATO-led non-combat Resolute Support mission, met General Qamar Javed Bajwa at Pakistani army headquarters in Rawalpindi, according to the media wing of Pakistan's military.

Pakistan is seen as a key player in Afghan peacemaking and has been acknowledged by Washington for helping to bring the insurgent Taliban, in power from 1996 to 2001, to the negotiating table.

But the process has stalled amid a resurgence of violence and disputes over the agenda for negotiations, including ceasefire arrangements.

A statement from the US Embassy in Islamabad said Khalilzad had "stressed the need to accelerate progress towards a just and durable peace in Afghanistan" during the meetings with Bajwa and with government officials.

The US special envoy proposed a shake-up of the process this week during visits to Kabul and the Qatari capital, Doha, the venue for negotiations, according to diplomatic and political sources.

Khalilzad had also shared a letter with Afghanistan's president and top peace official, published in local media and verified by Reuters, which said Washington would ask the United Nations to convene foreign ministers and envoys from Russia, China, Pakistan, Iran, India and United States "to discuss a unified approach to supporting peace in Afghanistan". 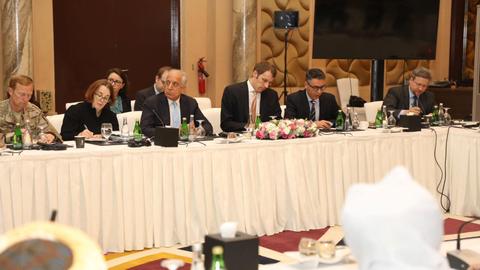 The Taliban circus: the new geopolitics of Afghan reconciliation