Myanmar's treatment of Rohingya "likely" a crime against humanity: UN

The UN human rights office on Friday said Myanmar's security forces have committed mass killings and gang rapes of Rohingya Muslims and burned their villages in a systematic campaign that "very likely" amounts to crimes against humanity and possibly ethnic cleansing.

Witnesses testified to "the killing of babies, toddlers, children, women and elderly; opening fire at people fleeing; burning of entire villages; massive detention; massive and systematic rape and sexual violence; deliberate destruction of food and sources of food", the UN said in its report.

One woman told UN investigators how her eight-month baby boy had had his throat slit. Another woman was raped by soldiers and saw her five-year-old daughter killed as she tried to stop them.

"The 'area clearance operations' have likely resulted in hundreds of deaths," the UN report said.

"The devastating cruelty to which these Rohingya children have been subjected is unbearable," UN High Commissioner for Human Rights Zeid Ra'ad al Hussein said.

#Zeid calls for robust reaction of international community to the gravity of the situation in Rakhine #Rohingyas https://t.co/uD2ZtarwrR pic.twitter.com/yu3FgPaUB2

Around 66,000 people have fled from the Muslim-majority northern part of Rakhine State to Bangladesh since Myanmar's military launched a security operation in response to attacks on police border posts on October 9, 2016, the UN report said.

The UN report was issued in Geneva after the investigators gathered testimony last month from 220 Rohingya victims and witnesses who fled the "lockdown area" in Maungdaw in Rakhine for the Cox's Bazar district in Bangladesh.

The plight of the stateless Rohingya, of whom some 1.1 million live in apartheid-like conditions in Rakhine, has long been a source of friction between Myanmar and Bangladesh.

Myanmar has denied almost all allegations of human rights abuses in northern Rakhine and says a lawful counter insurgency campaign is under way.

Najib has been an outspoken critic of the treatment of predominantly Buddhist Myanmar's Muslim Rohingya minority, calling on the government to stop attacks.

"This is a historic moment ... a noble effort that shows that all the pain and suffering of Rohingya in Myanmar will not go ignored," Najib said at the port in mostly Muslim Malaysia.

We hear their pain, those who have been raped, murdered and burned alive.

The aid is expected to arrive in Myanmar's Yangon on February 9, after Myanmar denied the ship access to Sittwe, the capital of Rakhine State, as organizers had hoped.

Myanmar has insisted that the 500 tonnes of supplies will be distributed equally to both Buddhist and Muslim communities.

Bangladesh, meanwhile, is determined to relocate Rohingya Muslims fleeing violence in Myanmar to an island in the Bay of Bengal, a Bangladeshi minister said on Wednesday. Critics say the island is uninhabitable. The minister said the move was temporary and Myanmar would ultimately have to take the Rohingya back. 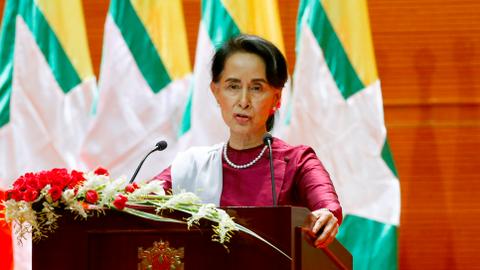